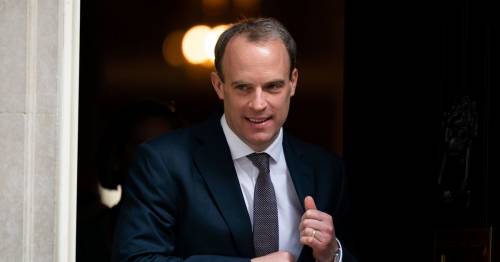 Dominic Raab has vowed to overhaul the Parole Board system after anger at the release of double killer Colin Pitchfork, reports say.

The child murderer was freed from prison in September on a strict set of conditions – only to be recalled earlier this month.

Authorities intervened after he approached young women in the street and amid concerns he was trying to cheat lie detector tests.

Pitchfork was jailed for life after raping and strangling Lynda Mann and Dawn Ashworth, both 15, in Leicestershire in 1983 and 1986.

News of his release and rearrest prompted a public outcry – which is thought to have pushed the Justice Secretary to act.

Colin Pitchfork, who was released in September
(


It is said that, going forward, Mr Raab wants the Parole Board to focus far more on the potential dangers before a decision is made.

"He believes the board is adrift from its core purpose and he wants to make sure it is exactly as he wants it," a source told MailOnline.

"Risk to the public must be the top consideration."

A large-scale review of the Parole Board launched 12 months ago had been due to report its findings by Christmas, the site said.

But this has reportedly since been delayed for Mr Raab to take a fresh look at the system.

He was then released earlier this year.

He is understood to have approached young women on multiple occasions near to the bail hostel where he was living.

Probation staff feared he was trying to establish a connection with them.

Pitchfork was also observed to generally have a “bad attitude” because he was not as engaging and open with officials as they would want him to be.

There were also suggestions that, while taking part in polygraph tests, which he is subjected to as part of his licence conditions, he may have tried to counteract the results by controlling and altering his physical responses with breathing techniques but this was spotted by staff.

Although officials said Pitchfork was not recalled for committing any further offences, the step was taken as a preventative measure after the string of incidents raised fears of a concerning pattern of behaviour.

David Baker, the officer who caught Pitchfork but said he was not consulted on his release, told a newspaper the incident was “expected” and not a surprise.

An artist's impression of Pitchfork during one appeal hearing
(

He added: “Pitchfork has reverted to type by approaching these girls.”

Pitchfork was subjected to more than 40 licence conditions, which the Ministry of Justice (MoJ) described as some of the strictest “ever set”.

Following a hearing in March, the Parole Board ruled that Pitchfork was “suitable for release”, despite this being denied in 2016 and 2018.

The board, which is independent of the Government, said it relies “heavily” on the evidence from professional witnesses who monitor and work closely with an offender.

Officials including probation officers and a prison psychologist “all supported his release”, the board said, adding that the then justice secretary Robert Buckland was represented at the hearing and “did not oppose release” at that time.

Then in June, in the wake of public concern about the release, Mr Buckland asked the board to re-examine the decision under the so-called reconsideration mechanism.

But the Parole Board rejected the Government’s challenge against its ruling the following month, announcing that the application to reconsider the decision had been refused.

Concerns had been raised by professionals he worked with about his capacity to “manipulate and deceive”.

While out on temporary licence, Pitchfork tried to get access to a smartphone, gave a female shopworker chocolates and told her lies.

But senior Parole Board judge Michael Topolski QC, who considered the application to review the decision, found officials did not find this “made him unsuitable for release”.

Pitchfork’s case now has to be referred to the Parole Board within 28 days.

Sometimes the circumstances of a recall to prison are considered “on paper”, meaning by solely reviewing documents.

But given the seriousness of this case, there will most likely be a parole hearing.

This is anticipated to take place within six months and will determine whether Pitchfork should stay in a closed prison, be transferred to an open prison or be released.

If he is not freed after that hearing, his next parole review would be in about two years’ time.

A Parole Board spokesman said: “We fully support any recommendations which will allow us to improve the openness and transparency around the Parole Board’s judicial decision-making and improve access to the process for victims.”

When questioned on the case in the Commons on Monday, Home Secretary Priti Patel said “this should never happen”.

John Cryer, the Labour MP for Leyton and Wanstead, said the release showed there was something “profoundly wrong at the heart of the system” and asked what conversations she was having with the Justice Secretary to make sure such incidents are never repeated.

Ms Patel said: “There are a lot of discussions taking place right now, this should never happen.”