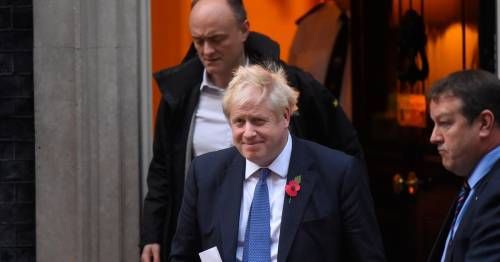 Downing Street always planned to "ditch" parts of the Brexit deal it didn't like after it "whacked Corbyn" at the polls, Dominic Cummings has claimed.

The divisive former No10 aide said Boris Johnson always intended to tear up the agreement – which he hailed as a "great" deal during the 2019 election.

But Mr Cummings said the PM never had "a scoobydoo" about what the agreement actually meant, as he continued his war of words against his old boss.

"And you shouldn't make any agreements with them until such time as you're confident that they keep their promises, and honour things, for example, like the protocol."

The UK's Brexit chief Lord Frost has piled pressure on Brussels to rewrite a key part of the deal governing trade in Northern Ireland.

But he confessed on Tuesday that the Government only signed the pact so they could tell voters they had got Brexit done.

Mr Johnson repeatedly boasted that the agreement negotiated with Brussels was a "great" deal that was "oven ready" to be signed.

In a series of tweets, Mr Cummings said: "What I've said does NOT mean 'the PM was lying in General Election 2019', he never had a scoobydoo what the deal he signed meant.

"He never understood what leaving Customs Union meant until November 2020."

Mr Cummings, who was a key player in the Vote Leave campaign, has become a ferocious critic of his former ally Boris Johnson, who he often derides as a shopping trolley careering from side to side.

He said the Government "wriggled through with best option we could and intended to get the trolley [Boris Johnson] to ditch bits we didn't like after whacking [Jeremy] Corbyn".

Mr Cummings was a key player in Downing Street until November 2020, and remains a divisive figure for his combative stance in No10 and his famous lockdown trip to county Durham.

The EU is expected to set out plans later today to cut checks on goods entering Northern Ireland from Great Britain after increased red tape led to disruption for businesses.

But European Commission vice president Maros Sefcovic has made it clear that the EU would not accept Lord Frost's demand for powers of oversight to be stripped from European judges.

The Northern Ireland protocol was designed to protect the peace process by preventing a land border on the island of Ireland.

Instead, regulatory and customs checks and processes were shifted to the Irish Sea.

It has caused new economic barriers on goods moving from Great Britain to Northern Ireland, creating disruption for businesses and tension among unionists.

Previous : Brittney Griner leads Phoenix Mercury to OT win over Chicago Sky in Game 2 of WNBA Finals, evening series
Next : Drug dealing among hundreds of crimes recorded by cops in or around Parliament