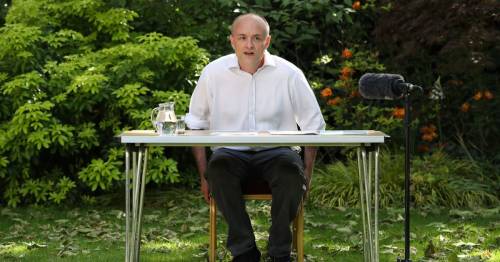 Boris Johnson ‘lied to Parliament’ over a Downing Street party – and multiple witnesses 'would swear under oath' that he did, Dominic Cummings declared today.

The former aide made fresh bombshell claims on his blog after the Prime Minister told MPs he “believed implicitly” that a BYOB bash on 20 May 2020 was a work event.

Mr Cummings said principle private secretary (PPS) Martin Reynolds agreed to speak to Mr Johnson about the event after another official said on e-mail that it broke the rules.

Mr Cummings also said he personally raised the “drinks party” with Boris Johnson and called No10 a “madhouse” but the Prime Minister "waved it aside".

It comes after claims emerged in the Sunday Times that two officials told Mr Johnson the event was “a party” before it happened, and said it should be cancelled.

No10 vehemently denied this – but now Mr Cummings, who left No10 in a blaze of infighting in 2020, has insisted it is true.

Mr Cummings added he personally told Mr Johnson “something like ‘Martin’s invited the building to a drinks party, this is what I’m talking about, you’ve got to grip this madhouse’.

"The PM waved it aside.”

Writing on his Substack blog, Mr Cummings added: “I told the PPS [Mr Reynolds] the invite broke the rules.

“He said: so long as it’s socially distanced I think it’s OK, I’ll check with the PM if he’s happy for it to go ahead.”

Mr Cummings said he was “sure” Mr Reynolds did later check with the Prime Minister – though accepted it was possible he presented it privately as a work event.

No10 has insisted Mr Johnson did not receive Mr Reynolds’ e-mail, which told staff to “enjoy the lovely weather ” and “bring your own booze!”

The Prime Minister’s spokesman said today: “Those claims of being forewarned are not true, as we made clear over the weekend”.

Senior civil servant Sue Gray is set to deliver a crucial ‘fact-finding’ report this week or next week.

While it cannot recommend disciplining the PM – because he’s in charge of his own punishment – if it spells out that he misled MPs he could face a Tory leadership challenge.

The Lib Dems have tabled a no confidence motion in the PM, and a fresh poll today by Redfield and Wilton Strategies put Labour 13 points ahead of the Tories – on 43% to 30%.

The PM admitted attending a party for 25 minutes on 20 May 2020. He claimed he thought it was a work meeting, despite long tables with snacks. It is one of a string of parties held during lockdown rules.

He told MPs: “When I went into that garden just after 6pm on 20 May 2020, to thank groups of staff before going back into my office 25 minutes later to continue working, I believed implicitly that this was a work event.

But according to the Sunday Times, a former No10 staffer believed “at least two people” told the Prime Minister it was “a party” and "should be immediately cancelled".

Well-connected columnist Dominic Lawson, who aired the claims, wrote: “I was told that Johnson's dismissive response was to say they were ‘overreacting’.”

Boris Johnson made a statement to Parliament last Wednesday
(

Mr Lawson also claimed Mr Johnson praised his principal private secretary Martin Reynolds – who faces the sack after inviting 100 staff to “enjoy the lovely weather ” and “bring your own booze” – as “my loyal Labrador”.

A No10 spokeswoman hit back at the claims, saying: “It is untrue that the Prime Minister was warned about the event in advance.

“As he said earlier this week he believed implicitly that this was a work event. He has apologised to the House and is committed to making a further statement once the investigation concludes.”