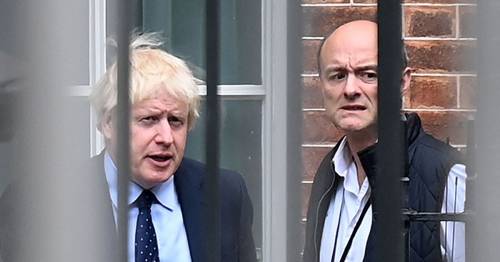 Dominic Cummings has described Boris Johnson as "joke PM" and accused him of failing to overhaul the Government's Covid response after the first lockdown.

The ex-No10 aide blasted Mr Johnson to not learning from the first wave of the pandemic in 2020 – and branded the Government's crisis response "a disaster".

Mr Cummings, who remains a divisive figure, was partially vindicated in his criticisms of the speed of the pandemic response by a damning report by MPs.

The Science and Technology Committee and the Health and Social Care Committee said ministers waited too long to push through lockdown measures in early 2020, leading to thousands of unnecessary deaths.

The 151-page document – published as the PM suns himself on a Spanish holiday – listed errors from abandoning community testing in March 2020, to the botched NHS test and trace system and the disastrous policy of discharging people into care homes without testing.

Speaking outside his house, Mr Cummings told Sky News: "The government system for dealing with crises is a disaster, as I wrote in 2019."

He added: "The system was bad for many years before Covid. Me and others put into place work to try and improve the system in 2020 after the first wave, unfortunately the Prime Minister – being the joke that he is – has not pushed that work through.

"Now we have a joke Prime Minister and a joke leader of the Labour Party and we obviously need a new political system."

Mr Cummings has become a ferocious critic of his former ally Mr Johnson, who he worked with on the Vote Leave campaign and in Downing Street.

In a seven-hour evidence Commons session in May, Mr Cummings accused the PM of presiding over thousands of unnecessary deaths and claimed ex-Health Secretary Matt Hancock had lied repeatedly.

He said Whitehall was dominated by "false groupthink" – a claim Mr Hancock also made about difficulties challenging scientific consensus.

The report said there was a "degree of groupthink" that meant "we were not as open to approaches being taken elsewhere – such as earlier lockdowns, border controls and effective test and trace – as we should have been".

But Cabinet Office Minister Stephen Barclay denied the claim – although he later admitted he had not yet read the report.

Mr Barclay also repeatedly refused to apologise for Covid failings during a bruising round of interviews on Tuesday.

Keir Starmer insisted the Prime Minister should apologise to the public for his handling of the pandemic.

Speaking on a visit to a HGV training provider near Oldham, Greater Manchester, Mr Starmer said: "The Prime Minister should take responsibility because the responsibility is his, and he should apologise.

"But I'd like to just start by acknowledging just how difficult a day this will be for the bereaved families learning what they will learn in this report, which is a damning indictment of the Government and the flaws and errors and failures of the Government running down the NHS before the pandemic, being far too slow to respond, with the price being paid by those bereaved families, chaotic track and trace.

"And I think the least the Prime Minister could do is address the families, apologise, and bring for the public inquiry just as quickly as possible."