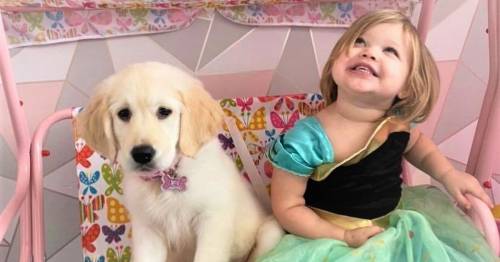 Two young dogs both died within an hour of falling ill after walking in the same area just hours apart.

Both of the family pets suffered seizures and died within an hour of taking sick.

Now as their distressed owners try to come to terms with their losses, they want an investigation by the council into the deaths.

They had both been on walks on the shore of Lough Neagh in Co Antrim before the seizures.

The incidents are being investigated by DAERA and Antrim and Newtownabbey Council.

She was much loved by her owner Kaylee

Young mum Kaylee Agnew from Antrim town, was walking with her toddler and the family's pup, Winnie.

She said: “Winnie was running in and out of the water. It was great fun and a happy walk for us. I had noticed dead fish in the water and kept Winnie away from them but didn't think much more of it.

“We got Winnie, our first family dog in January and she was the best addition to our home. On Thursday I took video footage of Miya Rose and Winnie on the water's edge. I took that video at 10.56am and by 11.55am poor Winnie was dead.”

“I'm completely heartbroken and in disbelief that our beautiful girl is gone. I keep replaying everything in my head and I think that if I hadn’t had her down in that water Winnie would still be here.

“It’s so frightening to think that my little girl, who is only two, was in the water as well. We need an investigation and answers and I’m grateful for DogsLive and Belfast Live for helping me to warn other families who might be in the area, especially coming up to the weekend when lots of families go for walks there.”

Kaylee, 21, took Miya Rose and Winnie home but when she went to help Winnie out of the car the puppy was having a seizure.

Kaylee said: “It was awful. I didn’t know what was going on but I rushed Winnie to the vet and got her there by 11.39am. Within 16 minutes our lovely Winnie was dead.

“The vet thinks whatever killed her was possibly in something she drank while she was in the water. Winnie was only five months old, she was lively and healthy and the very best dog for our family. We are so heartbroken, we had only gone for a walk and now Winnie is dead.

"Whatever it was acted so fast Winnie was dead within an hour of being in that water.

“The vet told me they reported it to the council and environmental health and have asked for the water to be tested.

“My dad also rang the council today and reported it and now we have heard from other people that this has happened before and that their dogs have drunk from the water in the same area and have been sick for weeks.

“Then on Friday I was contacted by another family whose little dog died on Thursday night just hours after we lost Winnie. They had been on the same coastline."

The second dog who died on May 5, was a 15-month-old black and white Cocker Spaniel called Milo.

His family, who live in Antrim town, are also looking for answers.

Milo’s owner, who did not want to be named, said: “We are just devastated and very distressed. Milo died last night. We had been walking on the same coastline as Kaylee had been but a bit further on.

"Milo wasn't actually in the water and I didn’t see him drink any of it. But he suddenly suffered a seizure and we took him straight to the vet. They treated and he seemed to perk up but when we were on our way home he just slipped away, he died in our car.

“We are shocked and devastated. The children are grieving for him. Milo was our first family dog and we loved him. We're very worried that the two deaths of these young, fit and healthy dogs is more than just a terrible coincidence.

"We need the council to find out if anything is going on and we want the public to know what’s happening on so they can take precautions.”

A spokesperson by Antrim and Newtownabbey Council said: "We have been made aware of two separate reports of dogs falling ill shortly after being in contact with water in the Antrim Lough Shore area, specifically at Rea’s Wood.

"We are working with the dog owners, local vets and our colleagues in DAERA to best establish the full circumstances.

"We are unfortunately unable to comment any further at this stage as investigations are ongoing. Any dog owner who is concerned in relation to their pet should ensure veterinary advice is sought."

Previous : Actor says he was detained by airport security because of stutter in ‘discrimination’
Next : Mariupol survivor lost 20lb in Russian siege as other starving women’s teeth fell out – World News