Dog who can’t walk, play or sleep in desperate need of life-saving surgery 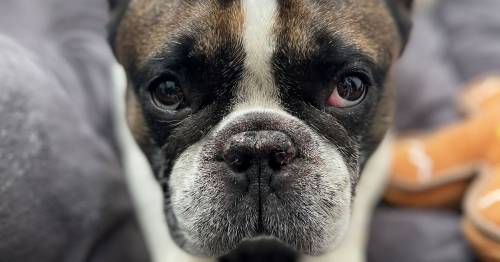 The RSPCA has issued a desperate plea for help to cover the costs of expensive surgery to help a French bulldog breathe.

Five-year-old Buster was taken in by Cotswolds Dogs & Cats Home when his owners could no longer cover the costs of his medical needs.

He’s just one example of a surging number of brachycephalic, or flat-faced, dogs who find it impossible to carry out normal dog activities such as walking, playing, or even sleeping.

Haley Medlock, from the dogs’ home, said: "Due to Buster’s short, flat face he has narrow nostrils and obstructed airways which means he struggles to breathe. These conditions are known as brachycephalic obstructive airway syndrome.

"He needs to have specialist surgery to widen his nostrils and remove some of the excess tissue from inside his airways allowing more air into his lungs and, hopefully, improving his breathing and his quality of life.

"This is expensive surgery so we’re hoping the public can help us raise the £800 needed to cover the bill."

He needs to undergo a life-saving surgery
(

The RSPCA has launched a new campaign – Save Our Breath – urging the public not to buy breeds of dog, cat, rabbit and horse who cannot live normal lives due to the irresponsible way they’ve been selectively bred.

With the surge in demand for pets during lockdown there are fears that more brachycephalic dogs and other pets will have been bred by breeders resulting in even more sickly animals who require expensive veterinary treatment to help them carry out the simplest of everyday tasks such as walking and playing.

And the RSPCA fears that more of these animals could be abandoned or relinquished to charity as their owners struggle to cope with costly veterinary bills as the cost of living soars.

The number of French bulldog puppies being registered with the Kennel Club increased 1,317 per cent, between 2011 and 2020.

This is also reflected in the number of Frenchies who are coming into RSPCA care having been abandoned or signed over, usually due to the cost of their veterinary needs.

While Staffies still account for the largest proportion of dogs coming into the RSPCA, their numbers are steadily declining, while the number of Frenchies increased by 1,567 per cent from three in 2015 to 50 in 2020.

RSPCA chief vet Caroline Allen said: "Our desire for cuteness and the selection for shorter, flatter faces – known as brachycephaly – has resulted in dogs who struggle to breathe.

"Their excessive soft tissue causes obstruction in their airways and their abnormally narrowed nostrils and windpipes leave them gasping for air. Struggling to breathe, or even sleep is very distressing and affected dogs are struggling with this every day, with serious impacts on their welfare.

"They also face eye problems, skin concerns due to excessive wrinkles, and painful back conditions due to corkscrew tails.

"We understand why there is so much love out there for these breeds. But it’s wrong that we’re knowingly breeding for features which compromise their basic health and welfare."

For those wishing to get involved in the Save Our Breath, there will be two surveys available to members of the public.

One survey will collect crucial information on brachycephalic animals in advertising, while the other will allow the public to share their own experiences with these animals.

This research will help inform the RSPCA's experts as it works to protect future generations of these animals.

Supporters can also sign up to the Give Animals a Voice campaign network for the latest information and access to campaign materials.