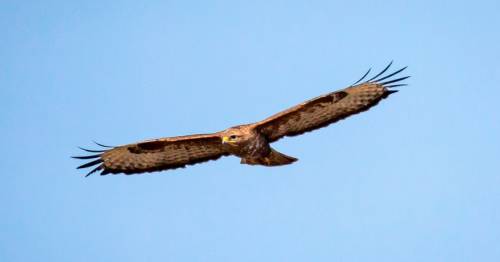 A woman has sparked fears among parents after claiming a bird of prey swooped and tried to grab her chihuahua in a park.

She says the animal – either a buzzard or red kite – circled over the small dog when she was taking her pet for a walk before making its move.

The unnamed owner says she is now worried for the safety of small children in Royal Wootton Bassett, Wiltshire, following the incident on Tuesday afternoon.

WalesOnline report she posted social media saying the bird came down and tried to snatch her Pomeranian cross chihuahua, that was thankfully on a lead at the time.

She said: "It circled a couple of times then swooped but couldn't get the right angle.

She says it was either a buzzard or a red kite
(

"Then it was just about to do it again so she hid but it was very close to her. He had his claws out ready to grab and [my daughter] is too scared to take her dog out now."

The Royal Society for the Protection of Birds has responded and says it's possible a bird of prey would attack dogs or humans in a bid to protect its chicks.

“Although it is very rare for a bird of prey to come close to people, they are wild animals and can become startled and try and warn people to stay away if they feel threatened, particularly if they have chicks nearby”, a spokesperson said.

“Some individual red kites have also become less scared of humans over the years due to people feeding them in their gardens.

"If red kites are acting defensively we’d recommend avoiding the area for a time to give any chicks a chance to leave the nest, and we also strongly urge people not to feed red kites – these amazing birds travel far and wide to get their food, and with their keen eyesight they rarely have any problem finding it.”

Last year, in Henley-on-Thames, Oxon, a two-year-old boy was left bloodied when a red kite swooped to grab his biscuit.

In 2020, red kites attacked people attending barbecues in nearby Watlington, forcing a local primary school to advise parents not to eat outside.