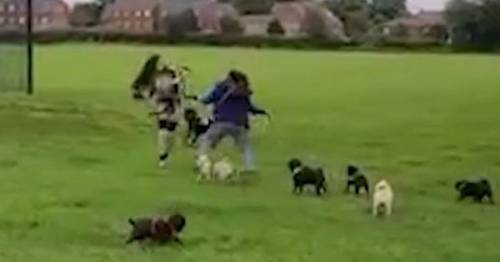 A professional dog walker has been spared jail after being filmed whipping a woman in the face with a dog lead.

The attack left the victim with a black eye and afraid to leave her house, a court heard.

Grant was slapped with 26 weeks in prison, suspended for 12 months, and magistrates ordered her to pay £250 in compensation to Miss Clay.

She was also ordered to complete 20 Rehabilitation Activity days with the Probation Service and banned from contacting the victim under the terms of a two year restraining order.

Miss Clay had told the court how she now feared “leaving her own home” after the attack, the Liverpool Echo reports.

She had been walking her seven pugs in Wavertree, Liverpool, when she came across Grant, the owner of Diamond Doggy Care.

The professional dog walker was arguing with another man at around 1:30pm, on Wednesday August 11.

From her dog walks, Miss Clay knew both parties a bit, so tried to defuse the situation.

She said that Grant, 45, appeared to be having a go at the man, alleging that his dog had growled at one of the several she was walking.

Miss Clay said that the man was inside the area fenced off for puppies, or dogs that are not suitable to be too close to other dogs, and suggested that Grant should not have let her dogs get too close.

Grant accused Miss Clay of “siding” with the man and when things became heated she began recording Grant with her phone.

Mobile phone footage, recorded by both Miss Clay, and a witness, show Grant stood by her van, before returning to the park to confront Miss Clay.

She first tries to snatch the phone out of Miss Clay’s hands then spins the dog lead around and whips it into her face before she left the scene in her van.

When Grant spoke to the Echo, she admitted she struck Miss Clay with the lead but said it was because she “lost her temper” after she was “verbally abused”.

Miss Clay said: "It was horrible, it really was. I suffer with a lot of anxiety and it was so upsetting.

"I feel like I can't go out of the house in case I bump into her."

Miss Clay describes her pugs, named Buddy; Eric; Rico; Macy; Button; Beau and Coco, as her "babies" after cancer treatment left her unable to have children.

At the time she said she felt she could no longer go into the park to walk her pack.

Grant was handed 26 weeks in prison, suspended for 12 months, and magistrates ordered her to pay £250 in compensation to Miss Clay.

She was also ordered to complete 20 Rehabilitation Activity days with the Probation Service and banned from contacting the victim under the terms of a two year restraining order.

Previous : Roman Abramovich wins court fight over claims Putin ‘ordered him to buy Chelsea’
Next : Captain Birds Eye is being replaced on packs of Fish Fingers for first time ever