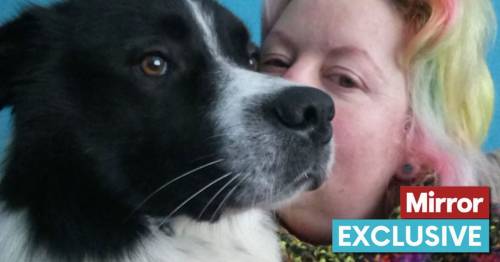 A woman has described the moment her dog tried to kill her in her own home, leaving her with horrific injuries more akin to a " shark attack".

Caroline Fisher, 48, had only just returned to her home in Blackpool, Lancashire, when her Bulgarian rescue dog Metcho turned on her on Thursday June 9.

The 5ft6 Karakachan, which weighs a whopping 12st 8lb, ripped the back off her right arm and mauled her left leg so badly her tendons were left exposed as she battled to escape with her life.

A passing neighbour came to her aid and Caroline was rushed to hospital, where she remains awaiting multiple skin and muscle graft surgeries.

But her family have slammed Lancashire Police, who they claim didn’t respond to the dangerous emergency for three days.

Caroline told the Mirror : “I don’t know what it was, maybe the overstimulation and excitement of seeing me after I came home.

Caroline has lost the back of her right arm
(

“He started getting jealous of another one of my dogs sitting on my knee, I went to move the dog and nudge him because I could just see a little look in his eye.

“I stood up to tell him no and he nipped me on the arm, but as I told him to stop it just got worse.

“His eyes glazed over and he just flipped. The other dogs were barking and I think it just created a bit of a frenzy.

“I was trying to get to the front door but he was dragging me back by the ankle.

“If I hadn’t escaped he would have killed me.”

Caroline, who is a huge animal lover and has previous experience of rescuing dogs, had flown to Bulgaria five years ago to adopt Metcho.

Metcho has since been destroyed
(

The carer who lives with her brother Richard said Metcho had only ever been aggressive towards another dog once before and never expected that he could turn on her.

Caroline had just returned from what should have been just a 48-hour trip to Berlin, but had been delayed by another two days when easyJet cancelled her flight amid the current travel chaos.

Now she believes the excitement of her returning home and over stimulus may have set Metcho off.

“I had been away in Berlin and was only meant to be away for two days but I got caught up in the travel chaos when easyJet cancelled our flight and we were stuck out there for another two days.”

The ordeal has left her not only seriously injured but utterly devastated at the loss of her beloved pet.

But her brother, Richard, said the trauma was only dragged out by police who told the family “it’s not an emergency” – before asking for £1,200 to put down the animal.

He said: “All they were bothered about was that the dog was in the house.

Metcho had not been aggressive towards Caroline before
(

“They said it wasn’t a priority.

“I had the dog in the back garden but I was worried that he would escape over the fence.

“We must have rang 50 different phone numbers.

“The dog warden said the only time they would come out is if social services called them out, they said they don’t come out to a dangerous dog like that for their own health and safety.

“The police finally rang back on Sunday afternoon and said we have seen your sister, we know how bad the attack is, we are going to get the ball rolling.

“The copper that came was actually really good to be fair, he said ‘I can’t believe it has taken this long’

“But they tried to charge me £1,200 to get the dog put down and they asked me if I could get rid of the body.

The dog was finally put down on Sunday evening after three days of Richard being forced to stay upstairs and eat out every night while keeping Metcho locked in the kitchen.

Describing the moment Richard arrived at the scene, he said: “There was nothing, the dog had eaten all the flesh and the blood off the floor, he had literally cleaned the house.

“When I arrived there was what looked like lumps of jelly, it was flesh and fat all over the door, the white PVC door was more red than it was white.

“Some people have said that her injuries are like a shark bite.”

Caroline's gruesome injuries could take months to recover from
(

Now the family have launched a GoFundMe to help Caroline financially as she will only receive two weeks paid sick leave despite doctors being unable to predict how long she will be hospitalised.

The family are also calling for answers and for the police and services to be better equipped to deal with dangerous dogs and dog attacks.

Richard said: “It was like some of them didn’t have a clue some, sounded like they weren’t bothered, the RSPCA just said we’re a charity we don’t deal with this.”

A spokesperson for Lancashire Police said: “We were made aware of an assault at Raymond Avenue, Blackpool, at 4.05pm on June 9.

“It was reported that a woman in her 30s had been bitten by a dog and had sustained leg and arm injuries. She was taken to hospital with serious injuries to her arm.

“It was established the dog was in the back yard of the property and under the control of one of its owners so posed no immediate threat to the public.

“Following consultation with the owners, the dog has now been destroyed.”

Previous : Security ‘cheered’ as Rwanda deportation flight halted and refugees let off plane
Next : Nine Omicron symptoms to look for in the fully vaccinated – and signs you may have it – World News