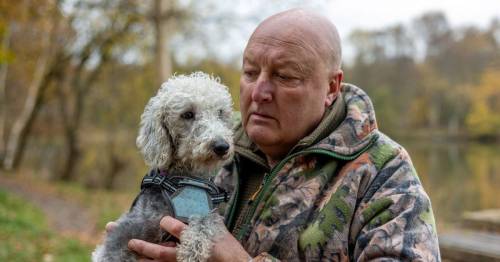 A 'laid back' one-year-old dog was rushed to the vet when she ate cannabis leaves – just months after she swallowed a spliff on the same walk.

Bedlington Terrier Holly fell ill hours after wolfing down cannabis leaves that had been dumped under a bush around Calf Heath Reservoir near Cannock.

Worried owner David Wiliams recognised the half-digested leaves and rushed her to the vet who gave her anti-drug injection.

Incredibly, it was just four months after Holly needed tablets to flush out her system after she ate a half-smoked cannabis joint on her daily walkies.

David, 58, from Cannock, Staffs., said: "I'd taken her for her usual walk and let her off and she'd gone sniffing behind a bush.

"I called her back and when we got in the car she didn't look right and she smelled strange.

"I recognised it as cannabis because we've had a lot of anti-social behaviour around here so I know what cannabis smells like.

"When she brought up the leaves it confirmed suspicions and I took her to the vet again.

"I just couldn't believe it had happened so soon after she swallowed the cannabis joint.

“My friends and family joke that Holly’s got a drug problem.

“I have to say, she is a very laid back dog anyway but this time she was off her legs. We actually think she'd make a very good sniffer dog.

“Four months ago she got ill after swallowing a discarded cannabis joint. We took her to the vets and they gave her tablets.

“This time she’d obviously eaten too much of the drug and she needed an injection and we were told to check her regularly overnight."

Holly’s latest brush with cannabis happened while David took her on a walk around Calf Heath Reservoir near Cannock on November 19.

David, who has one grown-up son and lives with wife Jonanne, 47, reported it to police and is now warning other dog owners about the dangers of discarded drugs.

He added: “Dog walkers need to be extra cautious, I won’t be going down there again.

“My wife was horrified when me and Holly got home. She’s her little baby and she was so sick.”

A spokesperson for Staffordshire Police said: “A man reported that his dog had found and consumed cannabis left along a lane leading to Calf Heath Reservoir on 19 November.

“Police issued the man with safety advice and told him that the local council is responsible for removal of any waste products.”