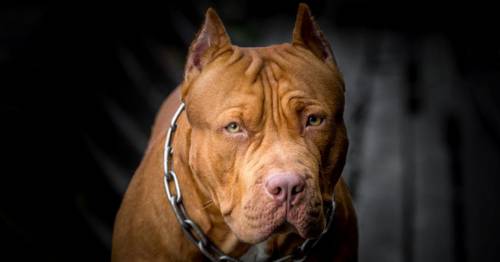 Dog owners are being warned that their beloved pet could be put to sleep if it shares characteristics with a banned breed.

Under the Dangerous Dogs Act 1991, there are four such breeds: Pit Bull Terrier, Japanese Tosa, Dogo Argentino and Fila Brasileiro.

It's illegal to own, sell or breed any of these dogs – however, the law is a little patchy with criteria based heavily around appearance and size when it comes to Pit Bull types.

If a dog shares certain characteristics with the banned fighting breed it is at risk of being put down, reports the Daily Record.

However, there is a little-known exemption in which a dog can be given a reprieve if it passes a court behavioural assessment.

New data has revealed an increase in children under the age of 15 having to attend hospital for dog-related injuries between April 2021 and March 2022.

She said: "Many dogs that are seized as illegal breeds are in fact well-behaved dogs with responsible owners, who just have the misfortune to have the wrong measurements.

"Nearly as many dogs – not banned breeds – were seized under section 3 of the Dangerous Dogs Act as under section 1 last year for being dangerously out of control, highlighting how important it is for Government to change the legislative focus from what a dog looks like to dealing with irresponsible owners of any breed of dog to keep our communities safe."

It comes as NHS data revealed hospitals in England had to deal with an average of four dog bite cases involving injured children every day over the last year.

Latest shocking figures suggest an "epidemic" of dog attacks has erupted with 1,516 cases of children under the age of 15 having to attend hospital for dog-related injuries between April 2021 and March 2022.

Other NHS figures show dog bite injuries, which need hospital attention, have more than doubled in 15 years since 2008- with 10,000 a year needing hospital treatment after an attack.

This is a rate of 15 treatments where someone has been “bitten or struck by a dog” for every 100,000 of the population.

Meanwhile, residents on a street in Manchester has seen a series of violent dog attacks have warned that the situation is “an accident waiting to happen”.

Neighbours on Platt Lane, Moss Side, say their lives have been changed by the presence of two “big” and “angry” Shar Pei dogs.

It is believed that the dogs have killed at least four cats in the area and bitten at least one woman – and given their close proximity to a primary school, neighbours are terrified of what could come next.

Previous : British Airways crew in isolation after one tests positive for monkeypox – World News
Next : Dad takes own life after kids killed in car crash so they can ‘play together forever’