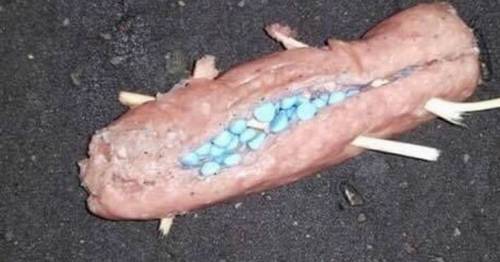 Dog owners are being warned to stay on high alert while walking their animals after a “booby-trapped” sausage laced with pills was found on a street.

The bizarre discovery was made in the Bishopbriggs/Auchinairn area in Glasgow, next to Strathkelvin Avenue, by a local dog walker.

The sausage had been cut open and stuffed with blue pills before cocktail sticks were inserted into it to hold it together, Glasgow Live reported.

A post on Facebook group Bishopbriggs notice board has warned dog owners in the G64 postcode area to keep their eyes peeled and dogs on a leash in case more items have been left in the local area.

The dog walker who discovered the booby-trapped sausage removed it from the street and disposed of it safely.

Have you or your dog comes across one of these sausages? If so email webnews@reachplc.com

Back in 2018 a dog in north Wales had its stomach pumped after it discovered a bag full of sausage rolls stuffed with “blue pills and white powder” while out walking with its owner.

The food was found dumped on the floor near a bin in the Nova car park in Prestatyn, one evening in April.

It is not known if the pills found inside the sausage rolls are toxic.

The dog owner who has handed the food over to the police took her pet to the vet where it had its stomach pumped, the Daily Post reported.

Luckily the dog did not come to any harm and it is not believed to have eaten any of the food.

A post published on NWP Denbighshire Coastal and Abergele Facebook page, says: “We are looking for information to identify the person responsible for placing these sausage rolls, laced with blue pills filled with a white powder, within the Nova Car Park, #Prestatyn.

“These were discovered on the floor, out of the bags, near the bins.

“Thankfully the dog owner who discovered them took swift action in taking her dog to the vets and picking up the items.

“The poor dog had to have it’s stomach pumped but it, with great relief, the dog had not eaten any.”

Previous : Justice Fund pilot program a crash-course in life skills for youths from vulnerable neighbourhoods
Next : William broke key tradition with Kate Middleton proposal – and it risked annoying her dad