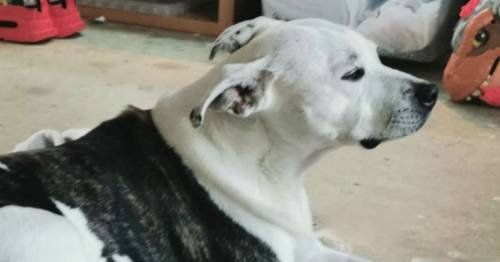 A dog owner has been left traumatised after her pet's neck was ripped open by an "out of control" dog during a horror attack.

Karen Waddington, 47, had been out walking her Staffordshire bull terrier Buster when the violent incident happened.

A large white Akita came running around the corner and instantly pounced on her 12-year-old pet before viciously throwing him around like a ragdoll.

The mum-of-five watched on in horror as the aggressive dog grabbed Buster by the neck and violently threw him around.

A neighbour then ran out of their nearby house and tried hitting the dog so it would release the other dog, the Daily Record reports.

Buster after his visit to the vets

The relentless attack only ended when the Akita's male owner emerged on the scene.

Meanwhile, another image shows Buster post-operation showing his neck stitched back together.

Karen reported the incident to both Police Scotland and the SSPCA but claimed there is believed to be no investigation at this stage.

"That day as normal we checked there were no dogs around whatsoever," said Karen.

"As soon as I let him off the lead a huge white Akita came around the corner on a retractable lead. It happened in a flash.

"He was getting thrown around like a rag doll by his neck.

"I was screaming. There was blood and fur going everywhere. A neighbour came to help and was punching it but it wouldn't let go.

"The woman whose dog it was ran to go and get her husband and didn't come back."

Buster before the attack last week

She added: "Then this guy in an orange vest came around the corner and shouted at the Akita and it dropped Buster.

"After an operation he got a drain put in his shoulder to let fluid out and was on ketamine for three days.

"What if it was a child? I am traumatised. He's such a sweet and adorable dog, I hope this won't change him."

"As you can see he's the biggest softy around, then the two photos after that were right after the attack, and the last two were the ones the vet had to do.

"He has had a drain put in, extensive wounds that all connect together. The vet said he is a very lucky boy as the Akita missed all the important vessels.

"He is in agony, hasn't touched any water since but is hopefully on the mend now.

"Thank you to all who were concerned, I don't think myself or Buster will get this out of our memories."

The post has now collected hundreds of comments from viewers who were shocked by the alleged attack.

Jill Mitchell said: "Oh my god, poor wee soul. I hope he recovers soon, bless him. This makes me so angry, this is what happens when the wrong people own Akitas, it's so sad. It should never have happened, just awful."

Valerie Jubb said: "That is horrendous – an awful thing to happen and witness. I'm hoping Buster recovers – give him a gentle hug from me."

Linda Mackie, believed to have witnessed the attack, said: "It's terrible, I thought someone was being murdered."

Susan MacRae said: "My heart goes out to you both! What a frightening experience for you and your beautiful boy! I wish him and you a speedy recovery from your awful ordeal."

Speaking on Wednesday, a spokeswoman for the SSPCA told the Daily Record: "We don't enforce any legislation around control of dogs or dangerous dogs so this isn't something we would deal with.

"We would suggest contacting Police Scotland about this incident.

Police Scotland has been approached for comment by The Mirror.

Previous : Mystery DNA found in Suzy Lamplugh’s car could belong to her killer, ex-detective reveals
Next : Baby is stillborn after mum, 31, catches Covid late in pregnancy