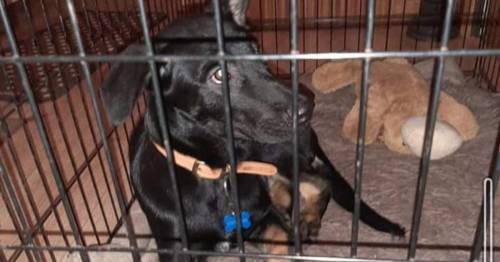 A woman was left seriously injured after her new puppy attacked her just hours after bringing him home.

Shocking images shared by Julie Nevett, a dog rescue worker, show horrific purple and black bruises all the way up the unidentified owner's leg along with two puncture wounds on her left leg.

On her right leg she was left with more gruesome bruises and puncture marks.

Julie blasted the dog breeders, Fawnest Kennels, who allegedly gave Thor to his owner in a Facebook post.

Thor was given to a dog rescue worker, Julie after the attack
(

She had been given the pooch after she rehomed Thor's brother after he also attacked his owner.

On her post, she said: "I have never publicly named the breeder of any dog that has entered our rescue. Today I'm going to break that rule.

"This owner, just like the owner of Thor 1, who is here with me, thought they were buying a quality puppy from a reputable breeder.

"Thor 1 is with us because he caused injuries requiring medical treatment to a young child in the family.

The owner said she had 'tried so hard'
(

"These are the photos of the injuries caused to Thor 2's owner along with the message 'I tried so hard I love him'.

"I feel dreadful for both owners, not only have they lost a significant amount of money and their puppy, they have quite serious injuries.

"Do not buy a 'pet' Malinois X German Shepherd from Fawnest Kennels.

"I b****y hope the breeders are suitably ashamed of themselves."

The post received a great deal of attention, but users were divided on who was responsible for the dog's behaviour.

Some blamed the breeder, while others said that the owners were not experienced to handle such a pooch.

"It's now five-months-old and it'll be lucky to see one-years-old. Its spine and hips are riddled with problems, pup has also bitten them a few times too."

Thor was sold to the family by breeders
(

Wayne Earl wrote: "Why the hell would they think those types of dogs are pets, it's beyond me.

"Serves them right for being so dumb, it's not down to the breeder, its down to the owners choosing the right dog and what they can handle.

Stickle Brix commented: "The breeder is the only one with the experience to make the decision about who should own a pup.

"Everyone saying the new owners should have researched needs to understand that the most diligent research will still not prepare you for the reality.

"The breeder should be more careful with where the pups go; it is 100% their responsibility.

German Shepherds and Belgian Malinois are typically trained for the police and the military, although it is not uncommon for them to be owned by families.