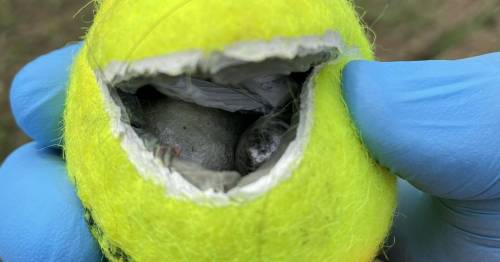 A hero police dog successfully caught an alleged prison smuggler by sniffing out a tennis ball stuffed with illegal drugs.

Harry the German shepherd used his outstanding search skills to locate the yellow ball after a man was spotted throwing items over the prison wall.

Police enrolled talented PD Harry to recover the item on the grounds of HMP Highpoint, a category C prison near Stradishall, Suffolk.

The male suspect fled the scene but was later found hiding nearby and arrested by officers.

PD Harry did it again
(

He has a talent for sniffing crime
(

Police dogs are often trained using tennis balls – but they are usually given as a treat in a game of fetch to reward for their good work.

The tennis ball was filled with drugs
(

It was thrown by a prison smuggler
(

PD Harry isn't a stranger to tracking down criminals in hiding.

He previously located a burglar who was hidden behind bins in the town centre, after reports came in of shoplifting.

The six-year-old German shepherd also tracked down a driver who was suspected to be drunk after fleeing the scene of a crash.

Another hero police dog who is set to do amazing things is Labrador PC Bonnie.

Bonnie started life on a "filthy" puppy farm and is now working as a valued search dog with Gloucestershire Constabulary.

When PC Bonnie isn't sniffing out dangerous drugs, firearms or ammunition, she's snuggling up to her handler, PC Rich Hunt and playing with her tennis ball – though hers isn't stuffed with contraband.