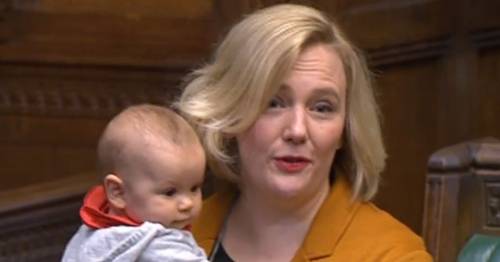 ‘Does Stella Creasy know all working mums have a juggling act with babies?’ – Eva Simpson

How would you react if you boarded a bus to see the driver with their baby ­sitting on their lap?

Or if you called the police to report a crime and the officer showed up with their gurgling baba in a papoose strapped to their chest? How about a baby crawling around the aisle of your local supermarket while its mum or dad stacked the shelves? You’d probably wish you’d gone to Specsavers.

Unless they’re popping in to let their colleagues have a cuddle with their newborns, parents don’t take their babies into work.

MP Stella Creasy had other ideas. On Tuesday she took her three-month-old son to a debate in Westminster Hall.

Much to her fury she was told this isn’t allowed. She immediately took to Twitter to complain, saying: “Apparently Parliament has a written rule which means I can’t take my well behaved 3-month-old, sleeping baby when I speak in the chamber… Mothers in the mother of all parliament are not to be seen or heard it seems…”

Speaker Sir Lindsay Hoyle has asked for the rules to be reviewed and said it was “extremely important” for all parents to participate in the House. He did, however, point out they have a nursery.

Many people, me included, can’t understand why Stella took her baby in at all? Was it to get a pic for Instagram?

She says she had to come in because, as an MP, while she’s entitled to maternity leave, she doesn’t have anyone covering her role to the detriment of her constituents.

As a working mum myself, I welcome all conversations about improving work for mothers.

But unlike Stella, most of us working mums don’t have the luxury of being able to pick and choose when we bring our children to work.

Most of us juggle work with the lion’s share of ­childcare and we do it without grand gestures or wanting a medal.

The rules of the Commons are peculiar, but they only affect a handful of women. Meanwhile the UK still has the third highest childcare costs for wealthy countries, according to the OECD.

Some mothers don’t go back to work while their children are little because it’s so expensive. Others have no choice.

So while it’s important for Stella to take a stand in her little corner of the world, it would be great if she could go beyond Westminster on this one.

Previous : Children crammed onto dinghy as French cops watch with 33 people dead hours later
Next : On-duty police officer caught having alfresco sex with woman ‘who loves a man in uniform’