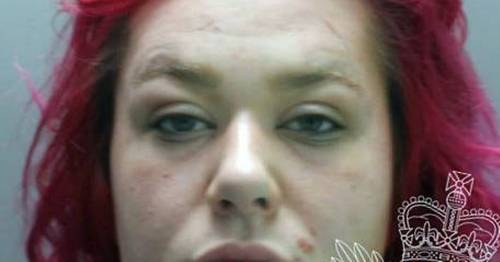 A “disgraceful” mum used her daughter to help make sure the coast was clear before her knife-wielding accomplice tried to rob a shop assistant.

The girl was "in her pyjamas, sucking a dummy and carrying a Teddy bear" in the shop in Rhyl, a court heard.

Her mum, Amy Nicole Redfearn, had been carrying out a “reconnaissance” mission before the knifeman entered the Rhyl store, as another accomplice in a skeleton mask, waited by the door.

The shop assistant activated a panic alarm and the two would-be robbers fled – with Redfearn, who had been watching events unfold from a street corner – back to her house.

On Tuesday a judge at Mold Crown Court condemned Redfearn's behaviour and jailed her for 38 months for attempted robbery, North Wales live reports.

The would-be robbery happened at the Fosters store in Rhyl
(

They were Redfearn with accomplices Kyle Crompton and Daniel Alan Shipley.

The court heard shop assistant Douglas Baker was cashing up at 10pm when a man in dark clothes and carrying a knife came in.

The object that man – Crompton – was holding was a hunting knife with a ten-inch blade. A second man, Shipley wearing a skeleton mask, stood by the door.

The court heard that Mr Baker activated the panic alarm and the pair fled, empty-handed.

The prosecutor said that two days before the attempted robbery, Redfearn, 25, had sent a message to her then boyfriend Crompton to try to talk him out of the planned crime.

She wrote: "Please don't do the shop. If you're caught you'll have to spend time in prison (which would affect) our future as a proper family. I love you too much to throw it all away."

She was jailed for attempted robbery
(

The court heard that all three of them nevertheless pressed on with the scheme.

Mr Rothwell said that three minutes before the attempted robbery Redfearn took her daughter, now aged seven, into the shop to "scope the place out".

She was "wearing pyjamas, carrying a Teddy bear and with a dummy in her mouth."

Then she left the shop, rang Crompton and waited at a nearby junction as the two men raided it.

But police found they have gone to Redfearn's house afterwards and she was arrested.

In her first interview, she said she had gone to get money from a cashpoint, meet a friend and buy Calpol, a medicine which helps children with pain and fever.

But in two later interviews she refused to answer questions.

Maria Masselis, defending, said Redfearn had pleaded guilty before her trial and is genuinely remorseful.

But the judge, His Honour Niclas Parry, said it was "disgraceful" for Redfearn to have involved her child in a "reconnaissance visit".

The judge said the shop assistant had been so frightened he believed he would die.

He has now taken out life insurance and suffers flashbacks.

The judge said: "As he put it – and I can put it no better: 'This is the kind of incident that shows what an ugly world this is', because this was an ugly crime."

He jailed Redfearn for 38 months for attempted robbery.

Shipley, 27, of Cae Griffith, Rhyl, was jailed for four years for attempted robbery in May.

Crompton, 26, of Eastville Avenue, Rhyl, is due to be sentenced for attempted robbery and having a blade or point at Mold Crown Court on July 23.