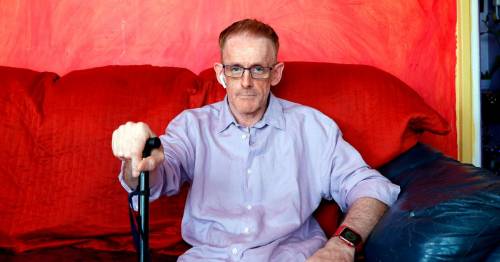 A disabled man has said he’s “already stockpiling food for winter” after he didn’t receive his £150 council tax rebate.

Mark Parker, from Lambeth, south London, has said he is “anxious all the time” about the worsening cost of living crisis.

On top of that, he’s furious at his council’s inability to get the rebate out to residents who he said “need the money the most”, My London reported.

The 56-year-old has been unable to work due to a mobility issue for over a year and as such receives Employment and Support Allowance (ESA).

And now he is so terrified of rising fuel prices that he has already begun stockpiling non-perishable food for winter.

He fears he will soon have to choose between whether to “put the lights on or buy a meal”.

Mark said: "When I go to the supermarket now everything’s gone up.

“My LIDL shop the other day was considerably more than I expected it to be, much more than it used to be. I was really really taken aback."

Mark said he's terrified Government provisions, such as the £150 rebate, aren't going to be enough when winter comes round.

"I don’t want to go back to that place where I’m having to choose between staying warm or having something to eat," said Mark.

He added: "It’s going to get a lot worse, I know that.

"I can just about afford to buy my shop, but I’m already thinking about making cuts so I’ve got savings and food enough for the winter."

Mark said he has cut out all luxuries, and is already filling his store cupboard with a few extra items each time he does a food shop, to prepare for winter.

The 56-year-old even compared the cost of living crisis to living through "the war".

He added: "I’m feeling anxious about this all the time."

"I'm having trouble sleeping, because I know it’s coming.

"I'm really really anxious because I don’t know how bad it’s going to get or how much help they’re going to give us."

Mark said he is especially worried as he has not yet received his £150 Council Tax Rebate, which he was banking on to ease the financial strain of the last two months.

He said thousands of other residents who pay full council tax have already received their rebates via direct debit from Lambeth Council, while those on full support are still waiting.

In February, the UK Government announced it would be issuing a £150 one-off payment to liable council tax payers in council tax bands A to D, designed to provide "immediate relief" in the face of rising energy bills.

The payments would also be made to occupants of these properties who are exempt from paying council tax, like Mark.

Councils were advised by the Government to pay out the rebates "as soon as possible from April," although they have until September 30 to pay them.

Mark said he has now been informed he will receive a letter at some point in June with a bar code he can take to his post office to receive his £150 in cash.

But he's angry he hasn't received the money more promptly and via direct debit like other Lambeth residents.

“I just don’t think they’ve acknowledged that it’s affecting the worst hit people," said Mark, who claims he heard nothing about his rebate from Lambeth council until last Friday (June 10), despite repeatedly trying to contact them to ask about it.

"How Lambeth has rolled out the scheme isn't just unique for the council and the Government asked councils to focus on direct debit payments for the first round of payments."

A spokesperson for Lambeth Council said: "Lambeth Council has paid out more than £10.8million in Council Tax Energy Rebates to 72,200 households in the borough ahead of the government’s September 30 deadline for issuing this support.

“Lambeth Council has also put in place a £4.3million cost of living crisis fund to help those suffering the most because of rising prices.

“In the case highlighted the resident will shortly be receiving instructions on collecting the £150 from his nearest Post Office.

"We have set up a dedicated phoneline, email address and put details on our website to help our residents understand how these payments are being made.

“Residents who are struggling to pay bills or afford food can access Lambeth’s Household Support Scheme which is open and providing a variety of support to those facing hardship as a result of the cost of living crisis.

“Direct debits were quickest to be paid as this system was already established. We have worked hard to put in place a secure and accessible payment scheme for those who do not pay by direct debit.”

Previous : Mystery of newborn found dead in canal STILL unsolved as mum not identified one year on
Next : Sheffield murder: Man dies after being found in fishing pond – police make arrest