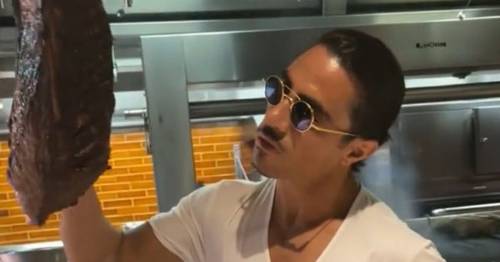 A group of diners racked up a £37,000 bill at Salt Bae's new London restaurant, it has been reported.

Diners at the new London eatery – which opened in Knightsbridge last month- shared a photo of their £37,000 receipt on Snapchat.

The party chowed down on a £850 golden tomahawk steak, 16 baklavas for £400 (£25 a piece), and another four extra special golden baklavas for £200, with a portion of fries on the side, it has been reported.

They reached the colossal £40,000 price tag with their alcohol orders.

Added to the bill was a 2006 bottle of rosé Dom Perignon for a conservative £1,620, LadBible reports.

Earlier this month, a diner shared a video from their visit to the famed London eatery, claiming to have experienced shoddy service.

TikToker @zora.eli posted a video of a waiter running into trouble while plating up a dish, dropping a slice of cheese from their knife.

The video's caption read: "Don't waste your money at #nusretlondon! He's ripping us off!"

Turkish chef Nusret Gökçe – better known as Salt Bae – has earned himself a big reputation for fancily sprinkling salt, serving up giant steaks and handing out even bigger bills.

His new London restaurant is quickly becoming as popular among celebs as Sugar Hut is among the cast of TOWIE.

On the menu you'll find £630 steaks, £100 burgers, £23 salads and £9 Cokes, so unless you've got bottomless pockets, you might want to consider pushing the boat out at TGI Friday's instead.

As well as his new London restaurant, Salt Bae has venues all over the world, in places such as Dubai and New York.

With their plush interiors and famously expensive dishes served up by the man himself, it's no wonder it's become a regular haunt for those with famous faces – even if they are a bit shocked when the bill comes.

Gemma Collins was recently left dumbstruck after being charged £1,450 for a steak.

She headed to the fancy venue with her boyfriend Rami Hawash for a romantic dinner, showing it off on Instagram, but soon realised her error.