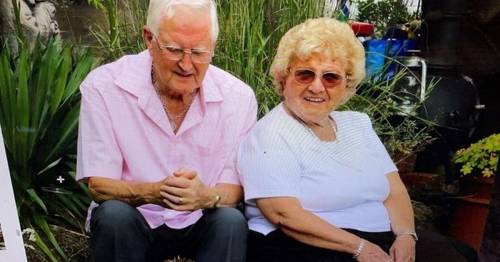 A grieving daughter said she was shocked to find out her dad was left with only two hours left to live after falling off a hospital trolley.

Daughter Jacqui Grace said her dad Geoffrey Hill, 82, had been waiting for his results at the A&E at Dudley's Russells Hall Hospital when she was called and told he was "fit and active".

She was told Mr Hill would soon be discharged, only to be called to the hospital that same evening so she could say her final goodbye.

Mr Hill had been waiting for his results since about 10am when he fell off the trolley, which had its rails down, at about 5:30 pm that afternoon, BirminghamLive reports.

The 82-year-old, from Stourbridge, suffered a brain haemorrhage as a result of the fall.

It was a double tragedy for Mrs Grace as her mother Janet, a dementia sufferer, had gone into hospital three days earlier and died just four weeks after her husband of 61 years, leaving the family devastated.

A joint funeral was held for loving couple.

What are your thoughts on this? Let us know in the comments below

Black Country coroner Joanne Lees raised a number of concerns about the great-grandfather's death, including the fact he had not undergone a falls assessment in A&E.

Russells Hall said at the time of the incident in February there was no national requirement to conduct a falls risk assessment in an A&E department.

Mrs Grace was left stunned by the revelation and has now started campaigning for improvements so no one else has to go through her same ordeal.

Ms Lees wrote to The National Institute for Health and Care Excellence (NICE) to say she was "concerned that vulnerable and elderly patients in A&E can spend long periods without any falls risk assessments being undertaken placing them at risk".

The coroner has called for national guidelines on fall assessments for all A&E departments.

And devastated Mrs Grace said she was left feeling guilty as she had convinced her father to go to hospital.

She said: "He wasn't desperately ill, he wasn't struggling for breath or anything like that. On the morning he lost the use of his legs and we decided we needed to get an ambulance.

"Dad adamantly did not want to go to hospital. He had to be persuaded. I felt guilty I had made the decision against his wishes."

Mr Hill arrived at A&E shortly after 10am and was immediately seen by a doctor, coroner Ms Lee confirmed in a report.

But he was still in hospital waiting for test results at around 5.30pm when he fell from the end of the trolley.

At around 9pm his condition deteriorated and he became unresponsive.

A CT scan identified a "very large acute subdural haematoma" and he died in the early hours of the following day. His cause of death was given as traumatic subdural haemorrhage.

Mrs Grace said the first she heard about the fall when was she was advised to hurry to the hospital as her father would soon die.

The 58-year-old, from Stourbridge, said the family were "joyous" earlier in the day when they were told retired electrician Mr Hill would be coming home, before things quickly took a turn for the worse.

She said he father was in good physical condition for his age and only a week earlier had been clearing snow from his and his neighbours' drives.

She said: "At 10pm I had a phone call and they said 'your dad has fallen and has a brain haemorrhage, he can't recover. If you don't get here in a couple of hours, he'll be dead'.

"I think I was in shock. It was almost not happening to me. It was like I was watching it happen to someone else. Both my sister and I said 'how has this happened?'.

Dudley Group NHS Trust, which runs Russells Hall, said it was now carrying out falls risk assessments of A&E patients following Mr Hill's death and a recommendation from the coroner.

Mrs Grace is now due to meet with Russells Hall bosses next month to discuss the changes and is also pushing for the risk assessments to be made mandatory in all hospitals.

Analysis of trust data showed there have been dozens of falls at the hospital every month.

The 94 recorded in July was the highest since January, though all but two of these were classed as 'non-harm'.

The number of "falls per 1,000 bed days" at the hospital has also been lower than the national average since the start of this year.

Mrs Grace said: "I'm not going to let this happen to someone else, I'm going to do anything I can to prevent it.

"My shock turned to anger that this could have happened in a hospital. Everybody I have spoken to has been absolutely shocked. They say 'surely people think about the risks and try to mitigate these risks?'.

"I want to try to get some positive out of this and that's why I'm trying to campaign for better safety. I want to know lessons have been learned."

Dudley Group chief executive Diane Wake said: "We would like to offer our heartfelt condolences to Geoffrey Hill’s family on his very sad death while he was in our care in February 2021.

"At the time, there was no national requirement or guidance on conducting a falls risk assessment in an accident and emergency department.

"Following Mr Hill’s tragic death, and the coroner’s recommendation, we have implemented a falls risk assessment for all patients attending our department."