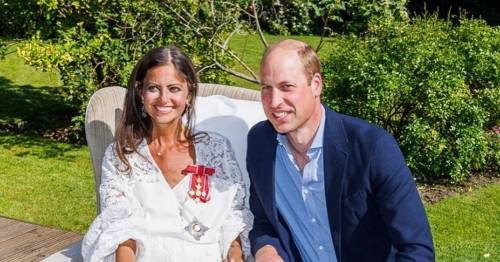 Prince William visited Deborah James at her home to present her Damehood and enjoy a champagne afternoon tea.

The 40-year-old, known online as Bowel Babe after campaigning to raise awareness of the disease, has raised much more her original £250,000 goal for Cancer Research UK.

Her JustGiving page reached the £5million milestone after donations from more than 250,000 supporters, including high-profile figures such as the Duke and Duchess of Cambridge.

"I am utterly honoured that he joined us for afternoon tea and champagne, where he not only spent a generous amount of time talking to my whole family but also honoured me with my Damehood.

"It’s quite surreal having a royal pop in at home, and yes you can imagine the cleaning antics and preparation went off the scale – but it was all irrelevant because William was so kind and he put us all at ease.

Deborah James with her honour

"He is clearly passionate about improving oncology outcomes as the President of the Royal Marsden. It was such a special day for my whole family, making memories to last a life time. He’s welcome back any time!"

Deborah’s two children, Hugo, 14, and Eloise, 12, chatted to Prince William who reportedly offered them words of advice and guidance.

Deborah's JustGiving page was set up to 'raise money to fund clinical trials and research into personalised medicine for cancer patients and supporting campaigns to raise awareness of bowel cancer'.

The star, who is battling stage four bowel cancer, recently revealed doctors do not know how much longer she has left to live.

Prince William poses up for a selfie

After being named a Dame, the bowel cancer campaigner revealed her shock saying: “OMFG, this is crazy.”

"I don’t know what to say. I’m blown away and feel incredibly honoured.

“I don’t feel like I deserve this. I can’t tell you what this means to my family, it’s so much to take in.”

In a statement, Downing Street said the Queen was 'pleased to approve the honour of damehood' be conferred upon Deborah.

Deborah James with her family and the Duke of Cambridge

The presenter of the BBC podcast You, Me And The Big C revealed on Monday she is receiving end-of-life care for bowel cancer.

Prime Minister Boris Johnson praised the mother-of-two for her work helping others with cancer.

Johnson said: "If ever an honour was richly deserved, this is it. Deborah has been an inspiration and her honesty, warmth and courage has been a source of strength to so many people.

Deborah James talked about her children on BBC Breakfast
(

"Through her tireless campaigning and by so openly sharing her experience she has not only helped in our fight against this terrible disease, she has ensured countless others with the Big C have not felt alone.

"I hope this recognition from Her Majesty – backed I'm sure by the whole country – will provide some comfort to Deborah and her family at this difficult time.

"My thoughts are with them and Deborah should know she has the country's love and gratitude."

Previous : Prince William’s best friend frisked by police ‘after hawk found in trap’ on his land
Next : Sandy Hook lawsuits against Alex Jones on track to resume