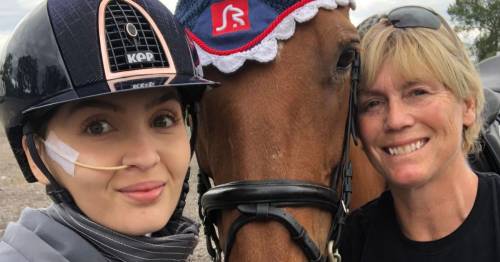 Daughter, 20, suing her mum’s GP for millions for allowing her to be born

A woman is taking her GP to court after claiming she should have never been born.

Evie Toombes, 20, from Skegness, Lincolnshire, is suing her mother's GP for millions in damages after stating her birth should have not been allowed to happen.

The para-showjumping star was born with spina bifida – a condition where a baby's spine and spinal cord fail to develop in the womb, causing a gap in the spine – and spends some of her days connected to tubes 24-hours-a-day.

Despite her condition, she has formed a career in showjumping, competing against both disabled and able-bodied riders.

As well as appearing on ITV's show 'Hidden Disabilities: What's The Truth?' and meeting the Duke of Sussex and Megan Markle when she won the Inspiration Young Person Award at a Well-child charity event in 2018

Regardless, she claims Dr Philip Mitchell is liable for a 'wrong conception charge' after failing to advise her mother, Caroline Toombes, to take vital supplements before getting pregnant.

Miss Toombs maintains had her mother's doctor advised her to take folic acid supplements to reduce the chance of spina bifida affecting her baby – her mother would not have gotten pregnant – and Evie would not have been born.

The High Court heard how 50-year-old Mrs Toombes went to visit Dr Mitchell at the Hawthorn Medical Practice in Skegness to explain her plans on having her first baby in February 2001.

Evie's barrister, Susan Rodway QC, told the court how Mrs Toombes had been keen to start a family after losing both her parents.

She said: "This was a very precious decision to start a family because she herself had lost her parents when she was young.

"They had been refraining from sexual intercourse until after they had received advice at this consultation."

But despite discussing folic acid during the consultation, Mrs Toombes insists she was not told by Dr Mitchell of its significance in spina bifida prevention.

Mrs Toombes insists she was not told by Dr Mitchell of its significance in spina bifida prevention.
(

Mrs Rodway stated had Mrs Toombes been adequately advised by her GP, she would not have proceeded with her pregnancy as hastily as she did.

If she had been put off getting pregnant, she would have had a "normal, healthy" baby – but one who was a "genetically different person" to Evie, the QC added.

But Dr Mitchell denies all claims as his barrister, Michael De Navarro QC, insisted it is his defence that he gave "reasonable advice" about the desirability of folic acid supplements being taken.

It was his common practice to tell potential parents that 400 micrograms should be taken by those gearing up for pregnancy and all through their first trimester.

He claims he surely would have advised the mother to have a good diet and good folic acid levels and denies saying supplements were not necessary.

The court also heard how Evie's mobility is very limited and will need a wheelchair more than ever as she grows older, whilst suffering from bowel and bladder.

Despite her circumstance, Evie still educates children about invisible illnesses and works at Nottingham University.

According to her own website, Evie describes her motto in life as: "Find a way, not an excuse."

Previous : Anger as Labour MP Stella Creasy told off for bringing baby into the Commons
Next : Simple question will win a game of Guess Who – but it comes at a cost