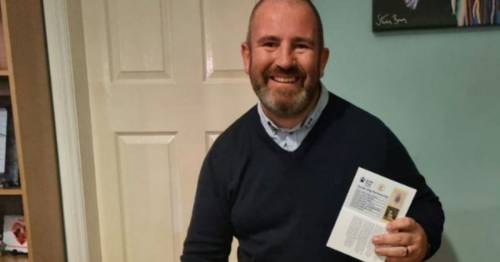 A dad who was left with brain damage and went blind after eating too many fish suppers has warned of the dangers of an unhealthy diet.

Jay Johnson, 48, suffered two strokes in three months after years of indulging in his favourite meal.

The dad, who was slim from a young age believed he could "eat anything he wanted" until he had his first stroke four years ago, followed by a second one just 11-weeks later.

After being left blind and brain damaged by the toll they took on his body, Jay who lives near Dunfermline, Fife, told his story to raise awareness of the killer condition.

Speaking to the Daily Record, he said: “When I was 21, I only weighed seven stone, so I thought I could eat anything I wanted. I loved fish suppers.

“If I could talk to my 18-year-old self, I would tell myself to wise up. Before my stroke I didn’t have a clue an unhealthy lifestyle could cause a stroke.

“I never want to run the risk of having another stroke. That is why I’ve made lifestyle changes and it’s making me feel like a happier, better person.”

Jay's unhealthy lifestyle began at 19, after his dad Mervyn, a part-time soldier, was murdered by the Irish Republican Army in Belfast.

Jay's diet spiralled when he lost his dad Mervyn, who was murdered by the IRA

The heartbreak continued and his diet worsened when he had to nurse his previous fiancee, Julie Cooke, through her battle with cancer.

She died just a month before their wedding, and Jay's relationship with food spiralled.

Five months later, he suffered his first stroke while chatting to a friend on Facetime.

He said: “My speech was really slurred, as if I was drunk, and my friend told me to go to bed. I stood to go to bed, my left leg buckled and I fell.

"I tried to use my left arm to push myself up but there was no power in it. I shuffled myself off to bed using my right arm and leg to crawl along the floor. It was frightening.”

Doctors told Jay high blood pressure had caused his first stroke and 11 weeks later he was hit with another one, after completing a 5km run against medical advice a fortnight before.

This time the stroke was more serious, leaving him blind and causing brain damage, which leaves Jay feeling irritable and overly emotional at times.

Since the strokes in 2018, he has got his life back on track – taking up disabled darts and is set to marry fiancee Sarah Thompson in August this year.

With guide dog Bailey by his side to give him renewed confidence, Jay has also swapped the regular takeaways for a healthy diet.

Keeping active too, the dad is now embarking on an international sports career, playing darts and is working towards a UK Paralympic team place playing goalball – a team sport designed specifically for athletes with a vision impairment.

John Watson, Associate Director Scotland at the Stroke Association said: “A stroke happens in the brain, the control centre for who we are and what we can do. It can happen at any time and at any age and can be devastating.

“We know not all strokes are avoidable, but as many as nine out of ten strokes could be prevented as they are linked to things you can change or manage.

“We know that it isn’t always easy, so pick something that’s manageable for you. Aim to stick with it for an initial three months and, if you can do that, you’re more likely to form a regular habit.”

As a first step, the Stroke Association wants people to make one small change to reduce their risk of stroke.

These can include even small changes like changing your diet to include less salt, exercising more, eating more fruit and vegetables or drinking less alcohol which could make a real difference.