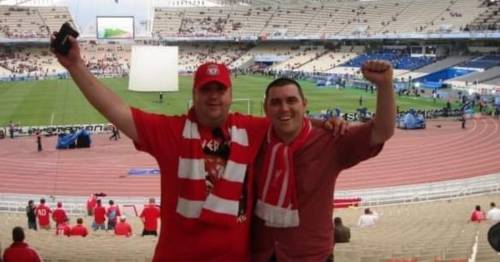 A dad has described his horror after waking up one day to find her was completely paralysed from the neck down.

Darren Wycherley, 55, said he felt like 'a head on a bed' when he woke up five-years-ago and realised that he could not move his body.

The dad-of-two from Speke shouted for his partner to call an ambulance whilst his son ran over from his house down the road.

Speaking to the Liverpool Echo, he said: "I was just a head on a bed. I couldn't move".

Upon being rushed to hospital, it was discovered that Darren had thoracic discitis, where there is an inflammation between discs of the spine.

The condition had caused him to become paralysed as his spine collapsed.

Before he became paralysed, he was an active person who enjoyed "to run around everywhere."

He then spent 352 days in hospital, during half of which he was unable to move.

Darren said: "I'm the lad who used to run around everywhere and have the time of his life and be the centre point of parties, fun boy dad. That was all gone."

Miraculously, during physio, his toe twitched when his therapist ran a paperclip up his foot.

Whilst it may seem like a minor movement, this gave him the hope and determination to one day walk again, and within a week he could move five of his toes.

His newfound sense of hope gave him the energy to work hard on his physio, and he has since reached a point where he can now move himself from his chair to his chair with the help of a Zimmer frame.

Despite feeling sadness after the changes to his body, he remains optimistic by looking for the brighter side of life, such as the freedom to go where he wants independently after getting his electric wheelchair.

Getting an electric wheelchair was a turning point for Darren, as it gave his some of the freedom and independence he missed so much back.

Speaking of his chair, he said: "I started going to Liverpool games again. It was brilliant.

"It opened so many doors for my social side, which was massive because I suffered with depression and anxiety just looking at four walls all the time."

However, after having a car reverse into him, he has lost some of the optimism he once had.

"I was always aware that drivers can be bad, drivers can have a slip of the moment in thought, but to experience first hand and be disabled and not be able to react like an able-bodied person can, it's quite worrying," he said.

Thankfully, he was able to alert the driver to stop before he was completely knocked over, but the car did nonetheless hit him.

He wasn't hurt very badly, but was left with some pains, a broken wheelchair and a feeling of frustration.

"The whole incident left me in shock, you know, to just drive off and leave, with no 'are you okay?' and no 'sorry'.

"I'm just annoyed more than anything, and angry that another person could do that and not even address it," he said.

The driver drove off without stopping, and the Cheshire Police are looking into the matter.

Cheshire Police said: "The rider of the wheelchair sustained minor injuries, but did not require any medical treatment. His wheelchair was also damaged as a result of the incident.

Previous : Covid cases drop by nearly 30% in a week as UK records another 185 deaths
Next : Unions officially back three-day weekend in big breakthrough for UK four-day week