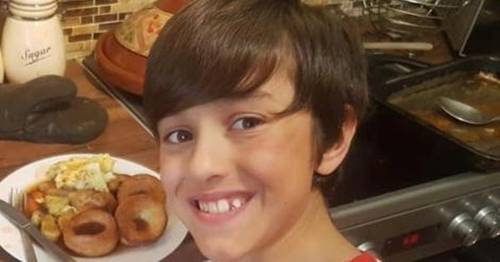 Dad’s heartbreaking tribute to son, 12, who took his own life after mum’s suicide

A dad has paid emotional tribute to his 12-year-old son who took his own life two years after his mum's suicide.

Young Layth Maumoniat, a year even at Allerton High School, was said to have been 'emotional and screaming' before he was found dead by his older sister.

"He was the funniest lad and the personality in our household."

He added: "He was so emotional and an hour later his sister came running and was screaming and he was found dead.

"Allah gave me my beautiful boy Layth 12 years ago but sadly I today have to return him back to his Lord where he'll be with the rest of the angels and reunited with his mum."

Days after the 12-year-old's death, a balloon release was organised by his friends from school
(

In 2020, at just 10 years old, Layth lost his mum to suicide and often struggled after his mother's death, Ali said.

"I just cannot imagine what was going through his head at that moment. I think all he was thinking was that he'll be back with his mum," he said.

"May the angels lift you in their wings and take you to the highest paradise my beautiful little lion."

On April 30, days after the schoolboy's death, a balloon release, organised by his friends from school, happened in Alwoodley, Leeds. Hundreds turned out with blue and white balloons as well as a balloon arch in the shape of a cross.

Ali and family held a funeral for Laythe on Wednesday (May 4) at Leeds Grand Mosque in Woodsley Road, Hyde Park.

His dad said: "It was a beautiful turnout. Everyone was there from kids to parents and non-Muslim and Muslim families.

"Everyone was very respectful at the Grand Mosque where the prayers were given to Layth."

Layth struggled after his mum's suicide when he was only 10
(

Layth was found dead by his sister at their family home
(

The news also brought sadness to hundreds of people across Leeds.

Many shared their condolences across social media, sending well wishes to Layth's family.

Mandy Grainger said: "Absolutely heartbreaking. Thoughts are with your family." Jacqueline Stott added: "Aww so sad RIP. Love to his family and friends."

Claire Crann added: "My heart breaks for him and his family. I have a son the same age and I just cannot imagine losing him."

Dipak Parmar said: "RIP little prince. May you find salvation and eternal happiness in the kingdom of God where you are forever safe. Rest little one."

Barbara Paley shared her condolences and said: "This is very sad, why does it keep happening", and Lora Benson added: "This is so sad."

A Leeds City Council spokesperson added: "The death of Layth Maumoniat is extremely sad and we offer our sincere condolences to his family, friends and everyone else who knew him.

"We are working closely with the school to ensure staff and pupils are supported through this difficult time."

A spokesperson for Allerton High School confirmed they were told the pupil had died, but "haven't heard anything else" since then.

They issued a brief statement on behalf of the school and said: "All we can confirm at the moment is that a young student, a year seven student, has died."