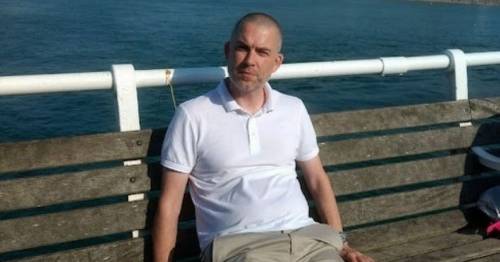 A dad who brushed off his headache as a hangover has been diagnosed with an inoperable brain tumour.

Mark Brandish, 52, suffered a headache over a few days last April and wrote it off as "not being able to handle his gin" anymore.

By early June 2021, his condition deteriorated and he was diagnosed with glioblastoma.

His wife Felicity, who lives in Flintshire, Wales, described how the diagnosis has turned their world upside down, DailyPost reports.

She said: "Literally a month before his diagnosis, Mark was running up a really steep local hill and telling me how he was as fit as a 22-year-old according to his watch. He's always been quite active so it's unbelievable that within the space of a month he went downhill so rapidly.

Mark Brandish and his wife Felicity, pictured, have been keen runners for a number of years
(

"He started with a headache on a Saturday in April. We both just laughed it off as him getting on a bit and not being able to handle his gin anymore. He still had the headache which lasted all of the following week."

She said that Mark thought the problem would fix itself but as time went on more concerning things started to appear.

Felicity added: "By now, he'd started to go through personality changes. Just odd things that were out of character for him.

"One night he stayed up until 4am on his PlayStation. That's not normal behaviour as by 11pm we're usually knackered and off to bed."

The mum-of-three said her husband would sometimes stop talking mid-sentence.

Felicity said: "We called the doctors and were told we'd be given a call back on Tuesday after the May bank holiday weekend. I just remember that seeming like a lifetime away so I called the 111 services on a Sunday who told us to go straight into A&E.

"We were there for seven hours before getting a CT scan that did reveal there was a tumour there. It was his daughter's 13th birthday when we were told there and then at the Walton, they believed it would come back as glioblastoma but had to wait on a biopsy."

In the months that followed, Mark underwent a course of radiotherapy and is currently receiving chemotherapy. The family now want to help fund research to find a cure for this disease that Felicity says "takes people from us far too soon".

Now, Mark's friends have rallied around him to help raise funds for charity.

Felicity said the couple had been avid runners for years and were due to take part in the upcoming Chester Half Marathon in May. They had signed up when spots first opened up.

She said: "I kind of put it to the back of my mind thinking it wasn't going to happen. It was just after Christmas he turned to me and said 'I could do it in my wheelchair'. I told him I couldn't push him for the whole 13 miles so we had to get a team together if we were going to make this happen."

Felicity along with friends will carry out his wish.

She added: "Most of us running have done the course before, some haven't. We've had one practice run so fingers crossed we can pull it off on the day."

The team have raised an incredible sum for Mark's chosen cause, The Brain Tumour Charity, and has so far raised more than £4,000.