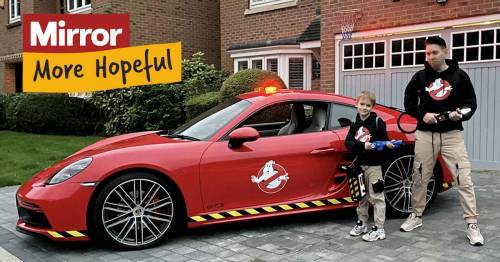 We all have that one classic film franchise we were obsessed with when we were younger, and which still brings us joy today.

But one seven-year-old boy named Ison has been lucky enough to have his favourite movie brought to life thanks to his dad.

Peter Bailey, 37, said his son is mad about the Ghostbusters franchise, and in order to be “the best dad in the world”, he decided to do something most people would deem crazy – transform his sports car into a Ghostbusters-themed racer.

The dad took inspiration from the “Ecto-1” Cadillac Miller-Meteor Sentinel vehicle that plays an important role in the four-film franchise when kitting out his own Porsche Cayman with flashing yellow lights and hazard tape.

The car is decked out with proton packs and hazard tape
(

And Peter said Ison was “well impressed” when his dad picked him up from school in the converted car.

The camera operative from Warrington said: “I picked him up from school, and he was well impressed with the car.

“I want to be the best dad in the world – most dads probably feel like this.”

Peter revealed his son’s obsession with Ghostbusters started when he saw the female-led film in 2016.

Ison and his dad couldn't wait to go and see Ghostbusters: Afterlife
(

He added: “My son watched the girls version that came out in 2016 when he was probably three or four years old and loved it.

“I was like, ‘You need to see the original ones’, and that was it – he was really into it, and he got me into it because we had the father-son bond going on."

And when it was announced the new film, Ghostbusters: Afterlife, would be hitting cinemas on November 18th, Peter knew he needed to “gear up” for it.

So, after kitting out his car, he took his son to a screening of the movie with the pair wearing matching shoes, hoodies and “proton packs”.

Peter even dressed up in the classic Ghostbusters costume
(

Peter said: “As soon as we heard that there was a new film coming out, that was it – it was just waiting for the new film to come out and gearing up for it.

“We knew we were going to get dressed up to go and watch it in the cinema.

“Putting the stickers on the car was always an idea.

“I thought whatever I can do to ham it up a bit and make it a great experience, I would do.”

The vehicle also carries two “proton pack” toys, which characters use to capture and entrap ghosts in the film.

And the dad admitted it was “well worth” spending £50 on stickers for the car, especially after his long work hours left him feeling “guilty” about not spending more time with his family.

He said: “Because I work a hell of a lot and I always feel like I’m missing out on the kids – I suppose it’s work hard and play hard.

“I feel like a guilty dad because I work so much, but equally, I will go all out if it means spending £50 on the stickers for the car for one day,

"You know, look at the memories we have created – it’s well worth it.

"When I get a chance to do something like this with the kids, I’ll definitely do it.”