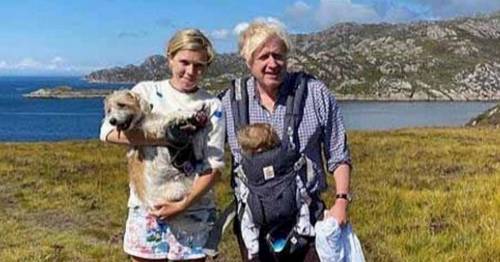 Dad-of-at-least-seven Boris Johnson has refused to say the price of nappies after holding back cash for the cost-of-living crisis.

The Prime Minister dodged a question from LBC interviewer Nick Ferrari on the cost of a 24-pack of Pampers in Boots.

He said “I’m not going to get into” that – and also refused to say how much the energy price cap went up to in April.

That is despite the £1,971-a-year cap – up by £693 in one jump – being a central reason families are plunging below the poverty line.

It came as Downing Street indicated extra help for the cost of living crisis could take until August to deliver.

Mr Johnson first promised to assist in “days”, then “months”, then today said “there is more coming down the track – July and so on”.

Boris Johnson with his wife Carrie, son Wilfred and dog Dilyn on holiday
(

But the PM’s spokesman clarified he was talking about an already-announced change to National Insurance thresholds which begins on July 6.

It appears the PM is gearing any new announcement to August – when Ofgem is expected to unveil another hike in energy bills to start on October 1.

Mr Johnson’s spokesman said “August and later in the year is around the time there may be more certainty” and “we may have more to say at that point”.

Boris Johnson has seven children who are public knowledge: Lara, Milo, Cassia and Theodore with ex-wife Marina Wheeler; Stephanie after an affair in 2009; and Wilfred and Romy with his new wife Carrie.

Unusually for a Prime Minister, Mr Johnson and his allies had always carefully avoided saying how many children he has.

But on a trip to New York last year – while Carrie was pregnant – he was asked if he had six kids and replied: “Yes”.

With a five-month-old baby at home, Mr Johnson was asked by LBC about the price of a 24-pack of nappies at Boots. But he replied: “I'm not going to get into…”. The Boots website, as of Thursday morning, had a pack of 24 newborn nappies priced at £4 per item.

The PM, who reportedly sought help paying for a nanny after his divorce despite his £159,584 salary, also refused to say how he’d economised.

He replied: “What I can tell you is that we will do everything we can to help people through a difficult time.

“And yes, I think that it is vital that we focus our fiscal firepower on those who need help the most.”

Pressed again to say what he’d cut down he replied: “Look, never mind… I wake up every day thinking about what we can do to help people through this period, just as we helped people through COVID.

“I think a fair-minded person would say that when it came to it, the UK government stepped up to the plate and came up with some pretty imaginative schemes to get people through the crisis.

“We had the biggest fall in output for 300 years. We came up with the COVID programme and many other forms of support.

“Now, that has, in turn, led to a real fiscal problem and so our room for manoeuvre is not as big as I would like, but we will do what we can to help.”

Mr Johnson later dodged questions about what the energy price cap currently stands at, following its 54% rise in April.

Baffled host Nick Ferrari replied: “Should you not know that, Prime Minister?”

The Ashfield MP dug in despite the criticism over his controversial remarks – and declared: "I'm glad it caused all this fuss".

The Prime Minister Boris Johnson during a visit to Churchill China in Tunstall, Stoke-on-Trent, today
(

He claimed he wasn't a "nasty Tory" but stuck by his stance that generations of Brits don't know how to cook and the Government "can't keep throwing money at the problem".

"The point I was trying to make is that I think the the actual food bank usage is is exaggerated," Mr Anderson told TimesRadio.

He said he had attended cooking and budgeting courses at his local foodbank for users where they learned to feed a family of five over a weekend for £50.

Mr Anderson said: "The point I was trying to make is that yes, we've got lots of food banks.

"But actually, if we get to the real nub of the problem in a lot of cases, then there are generations of people out there that simply haven't got the skills to to budget properly and to go shopping and do a proper weekly shop like we used to back in the day, and use of fresh ingredients to make nutritious meals.

"That's the point I'm making and I'm so glad it's caused all this fuss because it brings that debate out."

Asked if the PM agreed with Mr Anderson, the PM's spokesman said: "We recognise the challenging circumstances people are facing across the country that’s why we’re taking significant action to help people… and we stand ready to do more."

Asked if people could eat healthily on 30p, the spokesman said: “I think there are a number of people up and down the country facing significant challenges and difficult choices and that’s not something we want to see.”

Previous : Boris Johnson hints at windfall tax on oil and gas giants – ‘we’ll have to look at it’
Next : Horror as blood-soaked wrestlers fight in ‘death match’ in front of families