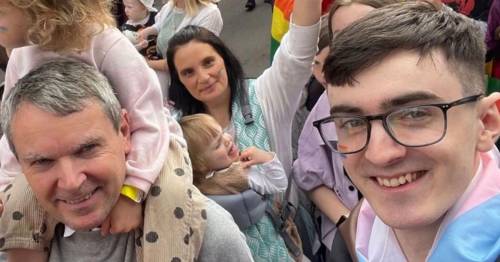 The father of Britain's biggest family The Radfords shared a 'proud' post after his son came out as bisexual.

In it, Noel Radford said he was "Sooooo proud" of his son Luke, adding "love you son" to his sweet caption.

Noel also shared an image of him and wife Sue with their son Sue waved a pride flag in the background.

The 21-year-old bravely opened up about his sexuality during episode two of the reality series, and mum Sue, 46, was also supportive of her son’s news.

She said she she was ‘so incredibly proud’ of Luke, and confessed she already knew he was gay.

“It is an emotional and strong episode, but I think it will help others going through the same thing with their parents,” she told The Sun.

“When he told me, I told him I already knew. As a mum you just know, but you can’t force them to come out. I am very proud of him for doing this,” Sue added.

Last year, Luke announced her was bisexual in an emotional post on social media, and said he had been "coming to terms with who I am’ since he was 17."

Sue and son Luke with a 'born this way' flag

“I’m bisexual. That’s me. My core. The part that makes my function the way I do. This post will help me push myself to be more comfortable with who I am and hopefully get me to where I need to go mentally,” he wrote, as he fired back at online bullies.

The mother-son duo attended Luke’s first-ever Pride parade in August, and he shared touching snaps of Sue wearing a T-shirt with the words ‘love is love’ as she held a giant flag.

Noel and Sue with their huge brood
(

Recently, the family have been sharing more details of their busy lives on their Channel 5 show, 22 and Counting.

In the latest episode, they were given the shocking news Noel was a "high risk" for a heart attack or stroke.

Sharing an update on their upcoming Channel 5 show, Noel said he decided to go to the doctor after struggling while running.

He says: "I run a few hundred yards and I’m knackered and out of breath. It just doesn’t seem right.

Recently, the family have been sharing more details of their busy lives on their Channel 5 show, 22 and Counting
(

“I don’t want to keel over and drop down dead on the pavement.”

Noel is then given the news that while his BMI was normal, his blood pressure was high and he was at risk of a stroke or heart attack due to higher cholesterol.

He was told he needed to change his lifestyle and diet habits to healthier options as opposed to takeaways.

Noel says: “It’s not what you want to hear is it, I was surprised that I was on the high risk."

Wife Sue then continues to say Noel is the "main provider of the family" and "works really really hard for us" before their 13-year-old son Max says: “I don’t want his [Noel’s] cholesterol to sky rocket and him have a heart attack, it wouldn’t be too good, because he could die.

“Frankly I don’t want my dad to die, summed up.”

In the opening episode of series two of their Channel 5 show, 22 Kids and Counting, the Radfords debated whether they should have baby number 23 – but decided against it in the end.

Asking all the family to join them in the living room, the kids predicted there was a big announcement ahead.

Noel shared with his huge family: "Right kids, we’ve got you all in here because we’ve heard the rumours going around the house.

"You’re all sort of thinking me and mum are going to have another baby, so we’re going to put the record straight."

Sue and Noel recently enjoyed a date night out
(

He added: "Mum and me have both decided no more. We’re done, there’s no more babies, no more brothers and sisters for you lot, we’re happy with what we’ve got. Little Heidi is the last of the bunch, the last of the Radford clan."

However, their kids were less convinced they would stick to their word.

One of their older sons replied: "You’ve said this multiple times, that this would be your last one. Can we get it in writing?"

Previous : Man chased and stabbed in underpass after being approached by group of schoolchildren
Next : Rep. Gaetz’s ex-girlfriend spotted entering Florida courthouse where grand jury is meeting