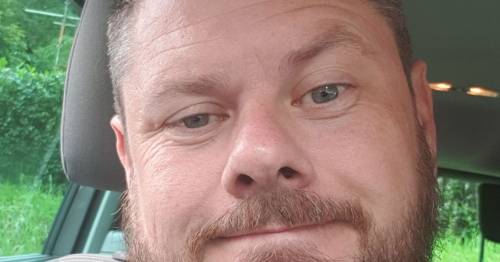 A dad-of-four thought working nightshifts was what was making him tired before he received the devastating diagnosis that he had kidney cancer.

David Brownlees, 44, also thought his stomach pains last January were down to "overindulging" at Christmas.

However, he was floored when he was told he had kidney cancer after not experiencing any of the symptoms associated with the disease, the Daily Record reports.

He has since had his kidney removed and has undergone immunotherapy as the cancer had spread to his lung, which has ravaged his body and left him unable to return to work.

David now has a massive scar where his kidney was removed, which his family have dubbed his "shark bite".

This week, David welcomed a new type of procedure for kidney cancer, which is a more targeted approach that blocks the growth of blood vessels in cancer tumours while harnessing the body’s immune system to help find and fight cancer.

“I’ll never be considered cured. I’m at high risk of it coming back again.

“I worked nightshift and so any kind of symptoms I would get, like being tired, having no energy during the daytime or sleeping more I put down to that.

David with his family, who have been his support system throughout his ordeal

“It was post-Christmas 2019, I thought I had overindulged and went to see the doctor and he arranged for me to have an ultrasound because he thought I maybe had gallbladder stones and when I went for the ultrasound they scanned down the left side of my body and she just went quiet and said can you come back for a CT scan?

“Two days later I had a CT scan and it was then they told me it was cancer.”

David said he was diagnosed on January 25 last year and had his kidney removed on March 2.

Scotland recorded its first Covid-19 case while he underwent his operation.

The following week, surgeries started to get cancelled and by March 25 the country plunged into lockdown – meaning all David’s aftercare appointments were done by telephone.

He continued: “Maggie’s and Macmillan were fantastic in giving me support but it was never face-to-face.

His side effects were also similar to Covid symptoms and every time he was taken to the hospital he was treated as Covid patient and had to wait for test results before starting treatment.

David said the isolation he experienced while in the hospital because of Covid restrictions was also hard to deal with.

He also said the immunotherapy he received left him experiencing “every side effect in the book”.

It also caused severe inflammation in his body, which has left lasting damage to his lungs, pituitary and adrenal systems and arthritis.

Even though David was “always prepared for the worst", he spoke of the relief he felt when he feared the disease had spread to his brain after getting bad headaches, but it was in fact caused by inflammation due to his treatment.

David said he welcomes this week’s news that the Scottish Medicines Consortium has recommended cabozantinib for use by the NHS across Scotland, in combination with nivolumab for the first-line treatment of advanced kidney cancer in adults.

He continued: “Everybody knows about breast cancer and prostate cancer gets a lot of coverage but I truly believe that the cancer that is growing fastest out there and I’m always hearing about is kidney cancer.

“If you have any symptoms at all, or anything out of the ordinary then just talk to your GP or anybody about it.

“People just dismiss the tiredness or the aches and pains, or ‘it’s just a urinary infection’.

“But if this keeps happening you really need to see someone about it.”

Robert Jones, Professor of Clinical Cancer Research, University of Glasgow, said: "This news is a clear demonstration of Scotland being at the forefront of cancer care, with local patients the first to benefit from this treatment approach. With incidence of RCC rising in Scotland over the last decade, this recommendation will mark an important milestone for patients with advanced disease.

"The combination of cabozantinib and nivolumab combines agents which both block the growth of blood vessels in cancer tumours and those which harness the body’s immune system to help find and fight cancer."

Previous : Thunder Bay’s brewing industry is booming, but can it support 5 breweries?
Next : Man’s first job at McDonald’s paid £28 a fortnight – and he felt like a millionaire