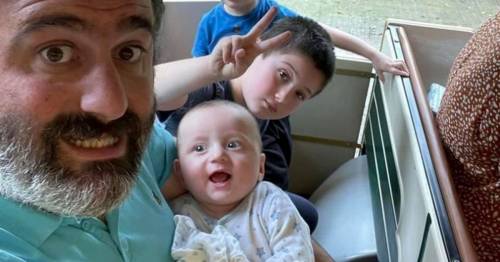 Dad has ‘no response’ from school after offer to settle £1,800 school dinner debt

A dad on a mission to ensure all schoolchildren are fed at school said he received “no reply” upon offering to pay off their dinner debts.

Dad-of-four and parenting blogger Simon Harris made the generous offer after parents at Ysgol Dyffryn Nantlle in Gwynedd, north Wales, received a letter warning them that their children wouldn't be fed unless their accounts were up to date.

The letter, sent out in the name of headteacher Neil Foden, said the school cook had been "instructed not to give food to any child" unless their individual accounts were in credit by November 19.

A “handful of pupils had run up debts totalling more than £1,800" resulting in an "unexpected deficit" in the school meals budget, Foden said.

Writing on Twitter, Mr Harris called the letter "madness" and offered to pay the £1,800 that was outstanding on the pupils' accounts.

However, Man Beh aving Dadly blogger Mr Harris said his offer was not taken up by the school – who have since released a statement saying they are not supportive "of any system which refuses the provision of a school dinner."

In a post on Facebook, Mr Harris said: "After offering to pay the pupil lunch debt at Ysgol Dyffryn Nantlle, I had no reply to the tweets or emails, and it was made clear to me by others linked to the school/council that any attempt to transfer the money to them would be refunded."

Keen for the money to go to a good cause, the dad-of-four has decided to donate the money to a local foodbank instead.

He continued: "Therefore, I’m pleased to say that the £1,800 has now been donated to Arfon Food Bank / Banc Bwyd Arfon who are the closest Trussell Trust-linked food bank to the village.

"Some of their food packages go to families within the school’s catchment area, and so it’s still going to benefit families with pupils at the school."

The Essex-based blogger told North Wales Live : "I've tried to be as good as my word in the circumstances."

In lieu of donating the money to the school, Mr Harris has given it to Arfon Food Bank / Banc Bwyd Arfon, are the closest Trussell Trust-linked food bank to the village

Premier League footballer and free school meals advocate Marcus Rashford responded to the letter and called for the school to be "more understanding" of pupils' circumstances.

It has now been announced that primary school pupils in Wales will be given free school meals as part of a new deal between Welsh Labour and Plaid Cymru.

Previous : Carer says ‘I’ll believe him when I see it’ after meeting with Boris Johnson
Next : Teenage girl needed plastic surgery after dog attack – as pet faces being killed