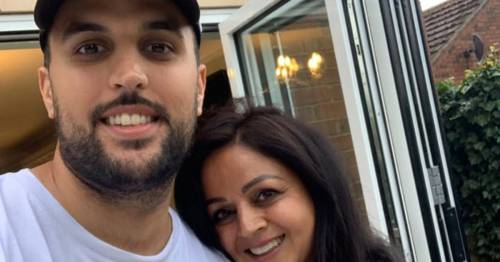 A dad who grew up in a "rough" low income area and had to sign onto Universal Credit in his 20s has revealed how he turned things around – now pulling in seven figures and giving his family a better life.

At 24, Aaron Branch, 31, from Birmingham, found himself on Universal Credit, struggling to make ends meet while living with his girlfriend's [Holly] family.

Having grown up in a neighbourhood where he was mugged as a teenager and "constantly had to look over his shoulder', he dreamed of the day when he could escape.

Estranged from his own father, Aaron also wanted to do better to provide for his family.

“My teenage years were tough and I was determined to work hard to change my circumstances because I realised I was the only one who could," Aaron told Jam Press.

Graduation day: Aaron says he was inspired by the area he grew up in
(

"Because of where we lived, I remember always having to look over my shoulder when travelling to and from school.

"Me and my brother were mugged at the age of 13 at knifepoint at 8am in morning, which really put my life and surroundings into perspective.

"It was challenging and unsettling to constantly have to look for safety.

“The start of my 20s weren't easy, I ended up on Universal Credit. It felt embarrassing having to sign on.

“It was hard but it was a means to an end.

Aaron with some of his employees at Social Agendas
(

"My mother has always been there for me, encouraging me to be the best I can be and to make smart decisions.

"I've definitely learnt a lot about communication from her ability to speak with confidence.

"I'm estranged from my father and have been for 10 years.

"He is one of the big reasons why I'm so motivated to provide for my own family.

"I knew that if I applied the perseverance I had learned throughout my life, I could make my business succeed.

“I used that drive and determination to get me where I am today.”

Aaron's new life is a far cry from his humble upbringings.

In January 2016, he was living in Holly's family's cramped living room, where he fought tooth and nail to launch Social Agendas, a digital marketing company.

Within just three months of launching his company, Aaron was offered a £4,000 loan by the Prince’s Trust, which saw him secure his first clients.

In 2022, he runs a seven-figure business and employs 20 staff members.

The success has allowed him to give fiancée Holly and their one-year-old son, Neo, the life Aaron dreamed of as a child.

Aaron, who is also a partner in the brand new delivery app Delivrme, said: "It's fulfilling to be able to provide for my family, but it's something that I expected to do rather than an achievement.

"Looking after 'homebase' is and always will be priority number one.'

“I now have investment properties and was able to buy my dream car, a Porsche Macan GTS, last year.

“I've also travelled the world to places like New York and Dubai, which I never thought I'd be able to do.

"I'm also very grateful to my fiancée, her family and my mum.

"Without them, this would never have happened."

Recently, Aaron secured a nationwide deal with the police force and the Home Office, which he says was "fulfilling" because he grew up in an area where people had a very different outlook on law enforcement.

He said: "We are training 45 people working in the police on how to use Facebook and Instagram advertising to recruit 9,000 officers across the UK.

“It makes me think about how far I've come because in the environment I lived in my teenage years, the police were seen as a nuisance.

“I’ve come full circle and now I’m helping to attract and support new officers from the sort of demographic I was brought up in.

“It’s been incredibly fulfilling to be part of that.”

Aaron's tips for anyone hoping to start a business

Ke en to give back to the local community, Aaron offers coaching and has written a book, 'The First 365' on his journey – which he gives away for free to anyone who wants to learn.

Here are his four key tips to how to do start a successful business and rake in the cash.

1. Offer the right product or service

Aaron said: “Great marketing can't sell terrible products and great products won't sell without great marketing. If you have something valuable for your customers that is half the battle won for growing your business.”

2. Be resilient and keep going

Aaron said: “Running a business is a marathon, not a sprint. You can’t expect success to come overnight.

“When things are not going your way in business, don’t get emotional – get analytical and work out how to turn things around.”

Despite any setbacks, Aaron insists it is vital to keep going.

He explained: “Running a business is hard work. Instead of wishing it was easy, motivate yourself to push through the roadblocks. It will make you a better entrepreneur.”

3. Learn from the greats

The businessman has recently had the opportunity to receive feedback from one of his business idols.

When appearing on Dragons’ Den, Steven Bartlett counselled him on his work ethics and commended him on the importance of his “humility and self-awareness” in business.

Aaron said: “Having great mentors has been the biggest blessing in my career. Learning from others on what works – and what doesn’t – can save you months of research and failures.”

Finally, Aaron said: “Your main priority over anyone or anything in your business should be your customers.

“Once you have a formula that works for them, put all your energy into it and focus on delivering what you have promised – whether that is a great product, or exceptional service.”