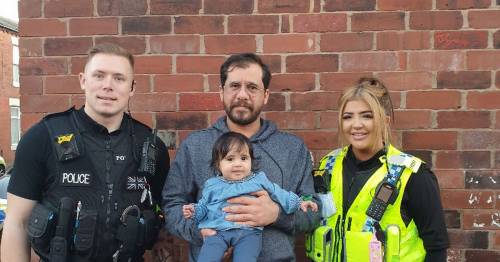 A horror-stricken dad lived every parent's worst nightmare after he and his wife discovered their seven-month-old daughter had stopped breathing.

The panicked Basim Alshammari ran out into the street, desperately shouting for help.

Thankfully for the anxious dad, he came across two police officers conducting a patrol at 2am in the Moss Side area in Greater Manchester, where Basim lives with wife Handy and daughter Jood.

PC Challenor and PC McDonald were patrolling the area and while waiting for the ambulance to arrive, the officers quickly resuscitated the tot by patting her back and performing compressions, which brought her breathing back faintly.

Basim told The Mirror: "I called 999 because Jood had a high fever.

Jood had been suffering with an infection which affected her airways
(

Baby Jood was taken to hospital for a check up
(

"Her mum started feeding her but after about five minutes we noticed that she couldn't breathe and wasn't moving at all.

"I picked her up and ran into the street shouting for help but there was no one there.

"Then a police car with two officers came down the street and I asked them to help us.

"They moved her right and left and patted her back and her breath came back."

Now Basim says he is forever indebted to the officers and doesn't know how to repay them for saving his little girl.

He reassured them that when Jood grows up, she will be told about the hero police officers that saved her when she was just a baby.

He said: "I feel so relieved and grateful to the policemen who brought my daughter back to life.

"I don't know how to return the favour they gave me, I will never forget them.

"I will tell this story to my children, my daughter and everyone who asks."

Once the ambulance arrived, baby Jood was assessed and found to be suffering from an infection which had caused fluid to enter her airway.

Paramedics confirmed that the officers' timely actions had helped to save the baby's life.

Inspector Anuratti Singh, of GMP's City of Manchester district, said: "This is amazing work from our officers whose swift action has saved a baby's life.

"The work of a police officer is incredibly varied, and they can be faced with a number of different situations each and every day.

"I am immensely proud of the professionalism of our officers in how they handled this situation as it could easily have been a very different story. Thanks to them baby Jood is safe and well."

Previous : Man killed girl, 11, while ‘driving at speed’ like a ‘looney’ ‘knocking her 46ft’
Next : Protesters face gunfire and tear gas in Khartoum, one police officer stabbed