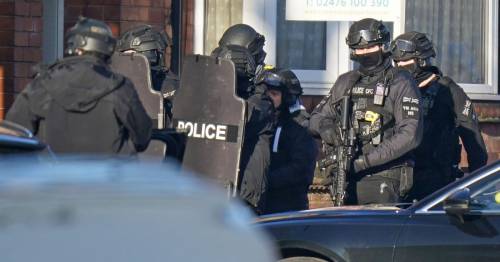 Dad, 41, remains barricaded in flat with son, 8, on fourth day of armed siege

A dad remained barricaded in a flat with his eight-year-old son tonight on the fourth day of an armed siege.

Firearms officers and negotiators have been on the scene in Earlsdon, Coventry, since Sunday, when officers were called to a welfare check at around 12.20am.

Amid fears the 41-year-old man was “armed with weapons” around 20 officers, including counter terror police, swooped.

A cordon remained in place today, some residents only allowed to leave home with a police escort and nearby Earlsdon Primary School and businesses told to stay closed.

Det Supt Ronan Tyrer said: “I am mindful of the significant impact this is having. We have in place a significant policing operation.”

Police officers have been at the scene since Sunday
(

He thanked the community for their patience and help as officers tried to “bring this sensitive policing operation to a safe conclusion”.

One neighbour, who did not want to be named, said: “People are scared and still hoping for a peaceful resolution. We just want the dad and little boy safe.”