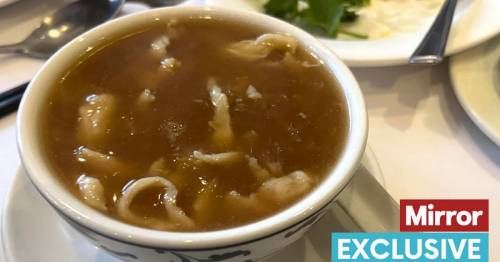 Soup made from the fins of endangered sharks is still on sale in UK restaurants after Tories reneged on their pledge to ban the cruel trade.

A Sunday Mirror probe found the dish on menus in London, Manchester and Liverpool, days after the Government pulled plans from the Queen’s speech which would have banned its sale.

To get the fins, fishermen cut them off a live shark, which they throw back into the sea to suffocate on the ocean floor.

A quarter of shark species are threatened with extinction, driven mainly by a desire for shark fin soup – a status symbol in some east Asian regions such as Hong Kong.

Around 73 million sharks a year are killed for their fins, yet buying and selling it is still legal in the UK.

TV’s Steve Backshall, of popular Sky show Shark, said the trade is “up there with rhino horn and ivory as the most senseless and wasteful of all”.

Our probe found some restaurants offering the soup clandestinely, fearing a backlash.

Our reporter was served it at a restaurant in Barnet, North London, after pre-ordering from an alternative Cantonese menu not available online.

An investigator who speaks Cantonese – the language of south east China – phoned ChuChinChow to order two portions, 48 hours ahead of our visit.

When we were served the sludgy, chicken-based broth, it smelled tasty but not fishy. The stringy blobs of shark fin are added for texture, not taste, says our guide Alex Hofford of charity Shark Guardian – who has fought the shark fin trade in Hong Kong for a decade.

DNA tests on samples of our soup, with the help of Greenpeace and the University of Edinburgh, found it more than 90% likely the fin was from a shark in the requiem family.

Shark expert Alex says the most likely species from this family would be blue shark – “critically endangered” in the Mediterranean and “near threatened” globally. We found six other restaurants willing to serve the soup when we contacted them, all confirming when pressed that it was “real shark fin”.

Mei Mei, in Liverpool, offers the soup for around £12 – assuring us: “We do real shark fin, we don’t do fake stuff”.

Jade City and Tai Wu in Manchester confirmed by phone they sell “real” shark fin. In London, Mandarin Kitchen on Queensway, Yi-Ban at the London Reg­­atta Centre and Golden Phoenix in Chin­atown all confirmed they serve the dish.

Boris Johnson promised in 2019 to use Brexit to champion animal welfare – including a ban on shark fin soup.

He said it was “barbaric” to eat soup made from the fins of sharks “who have been deprived of those fins while they are alive and thrown back into the sea”.

Investigators were served what is believed to be shark fin soup
(

The Government announced a “world-leading ban” last August, tied in with ending trade in foie gras – obtained by force-feeding geese – and new controls on fur coats.

The plan was ditched after a backlash from ministers, including Jacob Rees-Mogg and Ben Wallace, who reportedly called the blueprints “un-Conservative”.

Mr Backshall added: “It’s driving the destruction of an entire group of ancient animals. If Johnson backs out of this it makes us ask questions as to where the pressure might be coming from.”

Clare Brook, of the Blue Marine Foundation, said: “Sharks needn’t get caught up in a Conservative Party argument over foie gras and fur coats.”

A ban would also send a message to the EU – Spain is responsible for an estimated 25% of Hong Kong’s supply of fins.

Will McCallum, of Greenpeace UK, added: “It’s one of the most destructive fishing methods, but our government is turning a blind eye.”

Asked for comment, ChuChinChow told us they thought they had bought “vegetarian” shark fin, adding: “We will change our suppliers and take it off the menu.” Tai Wu denied selling the soup.

Mandarin Kitchen denied still serving shark fin, as did Golden Phoenix, who said staff had been mistaken. Jade City, Mei Mei and Yi-Ban did not comment.

Previous : House hunter horrified as dome in landlord’s back garden listed on SpareRoom for £750
Next : Woman’s life saved by smear test as she’s diagnosed with cancer despite no symptoms