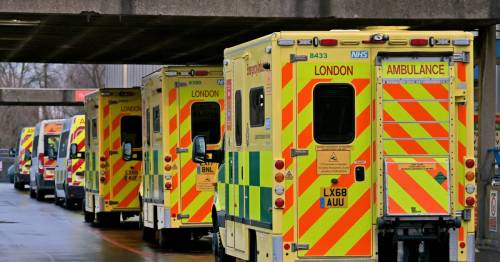 The NHS is set to axe a requirement that patients must not wait in A&E for more than 12 hours – as 400 people a day face such waits.

NHS England sneaked out a draft planning document abandoning the policy, as medics warn of “appalling” overcrowding in emergency wards.

Some 12,500 patients are expected to endure such trolley waits this month, from the decision to admit them, to finding a bed – after waiting hours for an initial assessment.

The policy on 52-week referral-to-treatment waits is extended to two years, while the 30- minute limit for ambulance handover delays in A&E is pushed to an hour.

The changes are only meant to last a year but experts fear they could normalise poor tandards.

NHS Providers chief executive Chris Hopson said: “It makes sense for it to address the reality trusts and systems are facing, rather than an aspiration which at least for the time being, is out of reach. We recognise this represents a dilution of standards that could affect the quality of care for some patients.”

The internal NHS England operational data suggests there were around 10,700 trolley waits of more than 12 hours in December, up from 9,300 in November.

The numbers have risen in January, with an average daily total around 400, which could lead to around 12,500 cases in the full month.

Adrian Boyle, vice president of the Royal College of Emergency Medicine, said: “Everything is going to continue to get slower, and patients are going to wait longer and longer.”

An spokesman for NHS England said: “Omicron means more patients to treat and fewer staff to treat them.”