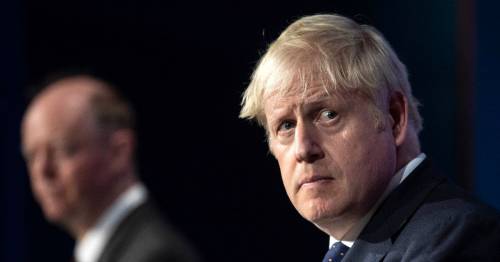 Mandatory masks, vaccine passports and working from home could all be brought in to prevent a Covid surge under the Government's new winter plan.

Boris Johnson set out his new Covid blueprint for the colder months, which includes a toolkit of contingency measures if the virus begins to spiral out of control.

The Government's "Plan A" to keep the virus contained includes booster jabs for the over-50s and other vulnerable groups, offering a first dose to 12 to 15-year-olds and advice to wear masks in enclosed spaces.

Mandatory jabs are being considered for NHS workers and twice-weekly Covid tests will continue until at least Christmas in secondary schools.

The traffic light system for foreign travel will also be overhauled within weeks, with speculation mounting that the green and amber categories could be scrapped.

The 30-page document also contains a toolkit of tougher measures if the NHS in England comes under "unsustainable pressure" in the winter months.

Under "Plan B", masks would become mandatory in certain settings, and vaccine passports would be made a legal requirement for places like nightclubs, outdoor festivals and football matches.

Ministers will consider ordering people to work from if they can, and there will be public information campaigns to communicate the change of risk to the public.

The measures might not all be imposed at once, as the PM said plan B was "a number of different shots in the locker" if cases started rising.

"You wouldn't necessarily play them all at once, far from it, you would want to do things in a graduated way," he said.

But when do we reach the need for plan B?

No10 has insisted there were no specific thresholds that would trigger plan B but factors such as a surge in hospitalisations and overwhelming pressure on the NHS could be critical.

Here are some key things to look out for.

Is the NHS in danger of being overwhelmed?

The stated aim of the Covid winter plan is to ensure the NHS does not come under "unsustainable pressure".

This means the Government will be keeping a close eye on the number of people ending up in hospital from Covid-19.

Hospitalisation rates have fallen dramatically since the start of the year following the success of the vaccine rollout, as jabs help to prevent serious illness.

However numbers have started to creep up again, with 8,256 people in hospital with Covid-19 on September 10.

The NHS traditionally faces pressures in the colder months from flu and other respiratory illnesses, so ministers will be keeping an eye on these figures too.

The document states: "In assessing the risk to the NHS, the key metrics include hospital occupancy for COVID-19 and non-COVID-19 patients, intensive care unit (ICU) capacity, admissions in vaccinated individuals, and the rate of growth of admissions."

The link between hospitalisation and infections

The Government has said repeatedly that the vaccine appears to have severed the link between Covid infections and hospitalisations.

This means that people who get the virus are less likely to end up in hospital with serious illness because the vaccine has offered some protection.

Earlier in the pandemic, rising infection rates would lead to a surge in hospitalisations but the situation has changed now more people are vaccinated.

The winter plan says the Government is monitoring "the ratio of cases to hospitalisations" and also "the proportion of admissions due to infections" among other factors.

It also states ministers are keeping an eye on how many people over 65-years-old are catching Covid-19 or ending up in hospital.

The success of the UK's vaccine rollout has been the critical factor in allowing the Government to ease Covid restrictions.

Keeping an eye on how well they are working will be a key priority for the Government.

A major booster campaign for the over-50s and the most vulnerable will start next week to top up people's immunity.

People will be offered either the Pfizer or the Moderna vaccine at least six months after their second dose to maximise the impact.

Chief Scientific Advisor Sir Patrick Vallance told a Downing Street press conference that vaccines' effectiveness was generally holding up "very well" – but there was evidence that it was fading.

He said: "The waning of immunity is clear."

Vaccine efficacy is among the factors being looked at
(

Sir Patrick added: "It's greater for infection than it is for the waning against hospitalisations and deaths, so they're holding up very well.

"This is some waning. And that waning is most evident in the people who are most at risk."

The impact of new variants

The arrival of a deadly new variant has always been a critical factor in the Government's plans.

The winter plan makes it clear that experts are closely monitoring for new strains and states that "global distribution and characteristics of Variants of Concern" are key factors for the Government.

England's top medic Professor Chris Whitty warned that this was the first winter with the Delta variant, which has now become the dominant strain in the UK.

He told a Downing Street press conference: "It is possible that the combination of winter events plus the Delta variant, which is highly transmissible, could lead to a situation where, on basis of the data, ministers decide that they wanted to trigger all or some of the Plan B."

When could we move to Plan B?

We simply don't know yet. The Government has been vague in setting out what thresholds might need to be crossed for it to press the trigger.

But a gloomy report by the SPI-M modelling sub-group, part of the Government’s SAGE group of scientific advisors, warned that infection rates would only have to rise slightly to pile pressure on the NHS.

Hospitalisations in England could hit more than 6,000 a day in the coming weeks if infections rise, they warned.

The scientists presented a range of “likely” scenarios ranging from an R rate, or infection rate, of 1.1 which could lead to 2,000 hospitalisations a day, about twice the current level.

If the R rate went up to 1.5 it could result in more than 6,000 hospital admissions with Covid a day in English hospitals, significantly higher than during the last lockdown.

"I think we're going to have to look at a number of measures… so of course that would be the level of hospitalisation, it will be the pressures on A&E, the pressures on the workforce, so we'd have to take all of these together."