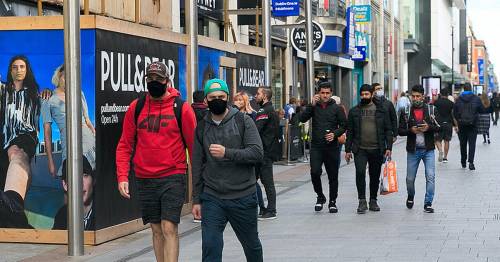 Face masks could be made mandatory by law and vaccine passports demanded for nightclubs at a week's notice under a winter ‘Plan B’ unveiled by government today.

Health Secretary Sajid Javid announced England's Covid Plan A through to March, telling MPs there will be five pillars to keep the virus at bay and avoid another lockdown.

They are vaccination and boosters; testing, tracing and self-isolation; money for the NHS and care; general advice like meeting outside or with windows open and wearing face masks in indoor crowded spaces; and taking an international approach.

Mr Javid promised the biggest free flu vaccine rollout “this country has ever seen”, with primary and secondary school children, pregnant women and over-50s and vulnerable groups all eligible.

People will be asked to stay at home if feeling unwell, wash hands regularly and use the NHS Covid-19 app to know if they've been exposed.

Meanwhile the current travel system with red, green and amber lists will be torn up and replaced with a new system to be announced by October 1 – and Mr Javid said it's "highly likely" the Covid jab will become mandatory for NHS staff.

But more measures will be kept in reserve for a Plan B – including mandating vaccine passports in some venues and forcing face masks to be mandatory by law once again.

Under Plan B the government will "consider asking people once again to work from home if they can, for a limited period".

Another Plan B measure will be "communicating clearly and urgently to the public that the level of risk has increased, and with it the need to behave more cautiously."

While the government can no longer impose local lockdowns under current law, councils are still allowed to shut down individual premises if there is a "serious and imminent threat" to public health.

And a full national lockdown is not ruled out – though it is an absolute last resort, and would need Boris Johnson to win MPs' approval in Parliament.

Plan B could be activated "at short notice in response to concerning data" – with as little as one week's notice before forcing vaccine passports into being.

Yet there are no set metrics for how Plan B measures will start to kick in – with politicians and experts instead deciding behind closed doors.

That is likely to prompt fury from business groups who face yet more uncertainty.

The government admitted: “The last 18 months have shown the pandemic can change course rapidly and unexpectedly and it remains hard to predict with certainty what will happen.”

The assessment could change based on vaccination rates, how fast and how much immunity fades, the amount of socialising as schools and offices return, and whether a new variant “fundamentally” changes the risk.

If vaccine passports are brought in under Plan B, they would be mandatory for:

But places of worship, weddings and funerals, protests and mass participation would be exempt. Mandatory vaccine passports and mandatory face masks would only be brought in if passed in a Commons vote.

It's thought face masks would be required in public transport and indoor crowded settings if they were brought back – though a final decision would only be made later.

Large parts of the Coronavirus Act will be axed, including powers to detain infectious people, and close schools, events and gatherings. But the Act is separate from powers for lockdowns, which still exist.

The government said: "It is possible that Plan A is not sufficient to prevent unsustainable pressure on the NHS and that further measures are required.

"This is not the Government’s preferred outcome but it is a plausible outcome and one that must be prepared for."

Mr Javid warned “we must be vigilant” as winter will bring “favourable conditions” for Covid – with more people spending time indoors, and flu and Norovirus demand surging in the NHS.

Under the winter Plan A, Brits will continue to have to self-isolate and take a free PCR test if they have symptoms of Covid-19. But they no longer need to isolate if they are a contact of a positive case, under changes made in August.

The government's Plan A of advice

Free lateral flow tests – previously guaranteed to the end of this month – will continue to be available for "the coming months" under Plan A.

But at some point in the future they will cost money. The government said: "At a later stage, as the Government’s response to the virus changes, universal free provision of LFDs will end, and individuals and businesses using the tests will bear the cost.

"The Government will engage widely on the form of this model as it is developed, recognising that rapid testing could continue to have an important, ongoing role to play in future."

Secondary school pupils, who were previously given guidance for September, will now be expected to test themselves regularly at least until classes break up for Christmas.

Contact tracing will also continue "through the autumn and winter", with people asked to take a PCR test if they have contact with a positive case.

The government "will continue to offer practical and financial support to those who are eligible and require assistance to self-isolate", though there's no detail on what this means in the plan.

The Plan A scheme for now and Plan B backup measures will be reviewed by the end of March 2022.

There will be no formal shielding for vulnerable people, but they “should consider advice from their health professional on whether additional precautions are right for them.”

It comes as Boris Johnson puts his trust in a "massive" booster vaccination campaign as he seeks to avoid further lockdowns amid fears of a tough winter for the NHS.

Over-50s are expected to start receiving Covid booster jabs next week after the Joint Committee on Vaccination and Immunisation (JCVI) advised ministers to give millions of older people a third vaccine dose.

Deputy Chief Medical Officer Professor Jonathan Van Tam confirmed the advice had gone to ministers as he warned of a "bumpy winter" ahead.

Around 30 million Brits are expected to be eligible for a booster, which includes all over-50s, NHS and care workers, and the clinically vulnerable.

The Pfizer/BioNTech jab will be administered at least six months after the second dose – regardless of whether people had Moderna or AstraZeneca originally.

Boris Johnson will later lead a Downing Street news conference, despite the death on Monday of his mother.

Experts warned that that rising cases would push the NHS to the brink this winter.

Prof Ravi Gupta, a member of the New and Emerging Respiratory Virus Threats Advisory Group, which advises the Government, said current data suggest "we're not out of the woods" and the Covid-19 figures "do not bode well for winter".

He told Sky News: "We can see from the figures that we're still nearing a thousand deaths a week and thousands of hospitalised patients that are challenging capacity in our hospitals – and of course making care for non-Covid patients extremely difficult as well because of the stretch of the staff that are in those hospitals who have been under pressure for 18 months now."

Prof Calum Semple, a member of the SAGE panel which advises ministers, warned of a tough time ahead for the NHS. "Now that we're opening up society, we've got to… live with not just Covid but the flu will come back, RSV (respiratory syncytial virus) bronchiolitis will come back, so I think we're going to have a bit of a rough winter," he told the BBC.

He added: "I can predict that the NHS is going to have a really tough time and it wouldn't surprise me if local directors of public health may be suggesting use of face masks in shops and on public transport."

Previous : Microsoft to buy back up to $60 bln in shares; names Brad Smith vice chair
Next : UK Covid booster vaccine plan explained – who’s eligible and when they’ll be available