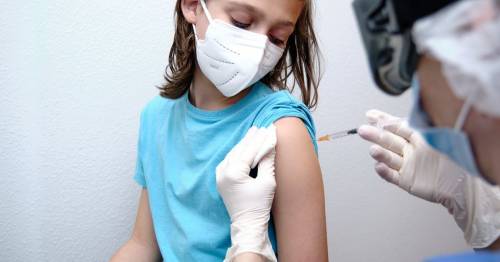 Boris Johnson is poised to announce all over-50s will be offered a Covid booster vaccine before Christmas.

The UK's mass booster programme will be formally confirmed by medical chiefs today, and Health Secretary Sajid Javid will give a statement in the House of Commons.

Reports suggest the booster programme will follow a similar pattern to the Joint Committee on Vaccination and Immunisation's (JCVI) interim advice from June.

Under that advice, stage one would give boosters to immunosuppressed and extremely vulnerable over-16s; care home residents; frontline health and care workers; and all over-70s.

Stage two would give them to all over-50s, plus all over-16s in a flu or Covid risk group, and any adults who share their home with an immunosuppressed person.

It comes hours after medical chiefs gave the green light to vaccinating children aged 12 to 15, amid fears more school disruptions from Covid threaten the education and mental health of pupils who have already missed lessons.

They warned the impact on kids, especially from deprived areas, justified the rollout of a single Pfizer jab to all secondaries from next week and said it would reduce outbreaks.

But the Health Secretary faced criticism for not launching the jabs sooner, with education chiefs fearing it may be too late to prevent Covid spikes in the autumn and winter.

Booster jabs for adults are also expected to be confirmed today after Boris Johnson yesterday let slip vaccine regulators have approved them.

Parents will be asked to give their consent before their child is vaccinated, although kids are legally allowed to decide for themselves if they are deemed competent.

It comes just 10 days after a separate government advisory body, the Joint Committee on Vaccination and Immunisation, decided against recommending jabs for over-12s, saying the benefits for healthy children were marginal as Covid is very low risk for most.

There are now fears the JCVI and CMO discussions have made the ­situation unclear and may fuel vaccine hesitancy in parents.

England’s CMO Professor Chris Whitty said it had been a “difficult ­decision” but that they would not be recommending the vaccinations “unless we felt that benefit exceeded risk”.

He added: “The effects of disrupted ­education, or uncertainty, on mental health are well ­recognised. There can be lifelong effects on health if extended disruption to education leads to reduced life chances.

“Whilst full closures of schools due to lockdowns is much less likely to be necessary in the next stages of the epidemic, UK CMOs expect it to continue to be prolonged and ­unpredictable.

"Local surges of infection, including in schools, should be ­anticipated for some time. Where they occur, they are likely to be disruptive.”

Prof Whitty said: “What we’re not trying to do is say to children ‘you must, must, must, must, must’ but what we’re saying is that we think on balance the benefits, both at an ­individual level and in terms of wider indirect benefits to education and public health, are in favour.”

He also revealed there were “no plans at the moment” to extend the vaccines rollout to primary school age children.

The JCVI’s Professor Wei Shen Lim insisted there was “no conflict” between their advice and that from health chiefs. Mr Javid said last night: “I have accepted the recommendation from the chief medical officers to expand vaccination to those aged 12 to 15, protecting young people from catching Covid 19, reducing transmission in schools and keeping pupils in the classroom.

“Our outstanding NHS stands ready to move forward with rolling out the vaccine to this group with the same sense of urgency we’ve had at every point in our vaccination programme.”

Teachers’ leaders welcomed the decision but said it should have been taken earlier with ­children vaccinated over the summer. Dr Mary Bousted of the National Education Union said: “While we recognise that a ­decision on ­vaccinating children needed careful ­evidential judgment, it would have been better if a ­decision could have been made earlier during the summer holidays.

“It will be well into the autumn before the impact of the vaccination programme will be felt.”

Children in the US are already having ­vaccinations against Covid.

Clinical evidence shows that a single dose of Pfizer cuts the risk of catching the Delta variant 55%, cuts transmission, and prevents most severe illness and death.

The plan to offer younger secondary school children jabs has been fraught with difficulty because the virus generally affects children less severely than adults.

The medicines safety regulator’s Dr June Raine said the side-effects for 12 to
15-year-olds being ­vaccinated were mild.

Scientists have warned children can also suffer heart issues as a result of getting Covid, and seem more ­susceptible to Long Covid. The vaccine rollout has so far been limited to children with health problems.

Jabs such as HPV and Diphtheria, Tetanus and Polio are already given in schools, supported by GPs and pharmacies. Mr Johnson spoke to reporters about booster jabs for adults, after being accused of ­dithering over the issue as Covid rates began to soar again.

He said: “That’s going ahead, that’s already been approved, I think that’s a good thing. ­Ministers are expected to ­recommend that all adults over 50 should get a third dose, ­probably of the Pfizer vaccine, six months after their second jab.”

Previous : Covid vaccines will be offered to all children aged 12 to 15 from next week
Next : Brixton shooting: Man, 27, shot dead while walking his dog pictured