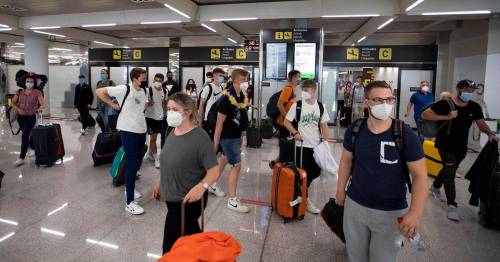 Covid travel rules currently in place will be torn up as a new scheme will be announced by October 1, the Health Secretary has announced.

Officials are expected to formally review the use of the traffic light system, which designates countries as red, amber or green in accordance with their Covid risk.

The changes could include a reduction of countries on the red list, the removal of PCR tests for double jabbed Brits and a new tier system which tells people which country they can and can't go to.

Today Sajid Javid told the Commons the Transport Secretary Grant Shapps will announce more details of this, which will come before the next Global Travel Taskforce review on October 1.

Speaking in the Commons, Mr Javid said the UK has had "strong defences at the border" and "we have already relaxed the rules for fully vaccinated travellers".

He added: "We will be providing a new framework for international travel. The Transport Secretary will be announcing details ahead of review point on October 1."

And Boris Johnson also promised the new version of the travel traffic light system of countries – set to be changed by October 1 – will be unveiled “shortly”.

He said: “We’ll be saying a lot more shortly about the traffic light system, about simplifying it and what we can do to make the burdens of testing less onerous for those coming back into the country.”

Fully vaccinated Brits coming from amber list countries will need to take a Covid test before arriving in the UK and again on their second day in the country.

They must also fill in a passenger locator form.

Non-vaccinated people returning from amber list countries must quarantine at home for 10 days and take PCR tests on day 2 and day 8.

The Health Secretary responded: "He's right to raise this and it's why we've kept our travel rules under review.

"We are looking to make changes very soon. The Transport Secretary is making changes to those rules as soon as he possible can."

Chair of the Transport Select Committee Huw Merriman asked Mr Javid if they will move to lateral flow tests which are cheaper so only the small proportion of positive cases will need to take a PCR test.

The measures were announced as Mr Javid outlined the Governments approach to tackling Covid over the autumn and winter months.

In the Government's report outlining their winter plan to tackling Covid, it states: "The Traffic Light System has sought to balance a greater degree of travel with limiting the risk to the UK from Variants of Concern.

"More recently the rules have been relaxed for many fully vaccinated travellers, reflecting the progress of vaccination campaigns athome and abroad.`'

The report claims the "number of daily international and domestic flights has increased by 59% since step 4 compared to step 3 levels" but officials are keen to increase this as it "still only represents 53% of 2019 average levels".

The review of rules come as part of the Government's international approach to tackling Covid during the autumn and winter months.

Ben Bradshaw, Labour MP for Exeter called Mr Javid to scrap the "outdated, unnecessary and hugely expensive testing regime" so foreign travel does not "become the preserve of the rich".

Mr Javid insisted it's important to have a "system of surveillance" and added "we are planning to make changes to the testing regime" and "the Transport Secretary will come to the House as soon as he's ready".