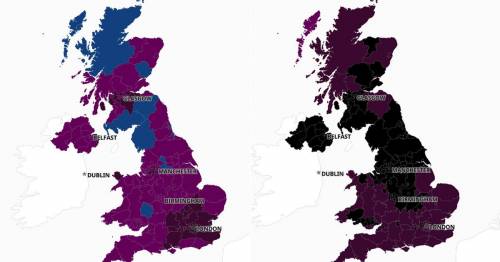 The number of patients in hospital with Covid in England has nearly tripled in a month, with more than 60,000 NHS staff absent due to Covid last week.

However, despite the sharp rise in hospitalisations since mid-December, the number of patients requiring ventilation beds has fallen significantly.

NHS staff in Manchester are treating the most patients in the country, while also battling the highest number of staff absences, NHS England figures show.

Yesterday was the highest UK daily death total reported in 11 months, with 398 lives lost to Covid-19.

Data published this morning shows that on Tuesday there were 13,113 people in hospital in England with Covid-19, up from 4,910 a month earlier.

It means that despite the spread of the Omicron variant, which has seen case numbers spiral to more than 100,000 every day since December 22, patients requiring ventilation has dropped 18 per cent in two months.

Of the 20 NHS trusts treating the most Covid patients, all saw a month-on-month rise, the figures show.

It is not clear how many people were admitted primarily for Covid, with NHS bosses saying they are detecting a number of infections among people hospitalised for other reasons.

But even if coronavirus is not their primary illness, those who test positive need to be isolated to prevent the virus spreading to non-Covid patients.

The NHS is also facing huge challenges with tens of thousands of staff forced to isolate.

Seven trusts – in Manchester, Leicester, Leeds, Nottingham, Newcastle, Derby and Liverpool – were missing more than 1,000 staff on that day.

Experts now believe that the latest wave has peaked in London, but parts of the Midlands and Northern England have seen sharp rises in recent weeks.

He wrote on Twitter : "Today’s peak is about expanding general and acute beds for large numbers of people with much milder disease symptoms.

"And there are significant numbers of people with incidental Covid – in hospital WITH Covid-19 as opposed to BECAUSE of it.

"But, remember, that to quote a senior NHS clinical leader this week 'given the need to separate any patient with Covid-19 and the generally milder presentations, the actual operational consequences of incidental Covid-19 are effectively the same for hospitals as primary diagnosis Covid-19.'"

Trusts with the highest number of staff absences last week

The Midlands had the highest number of staff absences due to Covid with nearly 15,000 unable to work, followed by the North East and North West, each with more than 12,000.

Just 73.3 per cent of patients in England were seen within four hours at A&Es in December 2021, the lowest percentage since records began in November 2010, NHS England said.