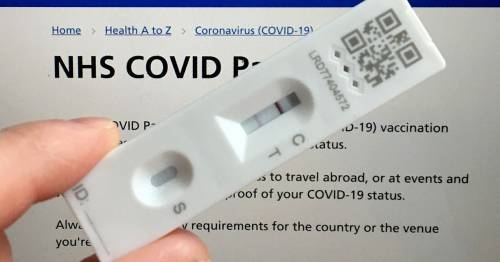 The Covid isolation period in England will be cut to five full days from next Monday, Health Secretary Sajid Javid has announced.

Currently people who test positive for Covid can be freed midway through their seventh full day of isolation, if they test negative on days six and seven.

But Mr Javid today announced that period will be cut by between 24 and 48 hours, after huge pressure from Tory MPs and a staffing crisis in the NHS.

Under the new rules, people will have isolate for at least five full days, starting at 12.01am the day after their positive test or the start of symptoms.

They will then be able to leave isolation at the start of the sixth full day – if they have tested negative for Covid on both Day 5 and Day 6.

Mr Javid said with testing, boosters and antivirals, “it’s no wonder we are the freest country in Europe. This country is leading the world in learning to live with Covid.”

But it came amid a furious Commons clash, as Shadow Health Secretary Wes Streeting condemned the PM's party rule-breaking and said: "The Prime Minister is not fit to lick the boots of NHS staff in this country."

This suggests the new total isolation time will, in reality, be somewhere between five and six days depending on what time the test came back or symptoms started.

However, it's thought people will be able to take their Day 6 test at one minute past midnight if they wish and go out straight away.

If an individual is still positive on day 5, then two negative tests are instead required on day 6 and day 7 to release from isolation.

Those who leave self-isolation on Day 6 are “strongly advised” to wear face coverings, limit close contact with other people in crowded or poorly ventilated spaces, work from home if they can and minimise contact with anyone who is at higher risk of severe illness.

If people do not test negative they must still isolate for 10 full days.

Meanwhile, guidance for close contacts of Covid cases to test themselves daily for seven days could be eased too. The government “will consider” potential changes, officials said today.

Mr Javid said the change would "maximise activity in the economy and education", adding: "UK Health Security Agency data shows around two thirds of positive cases are no longer infectious by the end of Day 5."

This rises to 93% if people have two negative lateral flow tests, 24 hours apart.

But Royal College of Nursing General Secretary Pat Cullen said: “Health and care workers must be exempt from a reduction of the seven-day self-isolation.

“By the government’s own estimate, almost a third of individuals are infectious 5 days after symptoms starting….This change could increase the risk of transmission to other staff and patients.”

Hannah Essex of the British Chambers of Commerce said: “Staff are also finding it difficult to get the Lateral Flow Tests they need to prove they can return to work.

“This new change will only help if urgent action is taken to ramp up the supply.”

Mr Javid had faced enormous pressure to cut the isolation period after the US cut isolation to five days, as long as people's symptoms had cleared by then, followed by five days of mask-wearing.

Shadow Health Secretary Wes Streeting welcomed the new policy but slammed shortages of lateral flow tests – and the PM's admission he spent 25 minutes at a No10 lockdown garden party.

Labour's Wes Streeting said: "The Prime Minister is not fit to lick the boots of NHS staff in this country"

The Labour MP said: "It's the silence that should worry Boris Johnson… the silence behind him on the Conservative benches and in the corridors.

"That wasn't an apology. It was the most shameful performance by a Prime Minister in the House of Commons in living memory."

Mr Streeting mocked the “terribly unfortunate coincidence of timing” in Mr Johnson cancelling a visit due to a close member of his family – either Carrie or his two children – testing positive.

And he said Deputy Chief Medical Officer Jonathan Van-Tam’s decision to step down recalled a tweet by the UK Civil Service four days after the May 2020 party.

The tweet said: “Arrogant and offensive. Can you imagine having to work with these truth twisters?”

Mr Streeting said: “JVT already has a knighthood, but working with the Prime Minister he must have the patience of a saint.”

"JVT already has a knighthood, but working with the Prime Minister he must have the patience of a saint"
(

Earlier Mr Javid had paid tribute to the top medic, saying: “There aren't many clinical advisers who can be recognised solely by three letters, but JVT's unique and straightforward approach to communication has seen him rapidly become a national hero.

"To use words that I think he might particularly like, we're grateful that we've had him on loan for so many years. He's been a top signing and he's blown the whistle on time."

But he clashed with Mr Streeting – accusing his Labour rival of saying "not one word of thanks" to NHS staff adding: "It will be noted by the British public."

Furious Mr Streeting stood up and said: “I’m not sure that’s in order.

“The Prime Minister is not fit to lick the boots of NHS staff in this country."

He was told off by deputy speaker Nigel Evans, who told him: “We won’t have that again, please.”

The UK Health Security Agency faced fury on the weekend after correcting the detail of its claims, after saying the UK and US approaches could not be compared like for like.

Mr Streeting added: “How many days does he think the NHS has lost, the economy has lost, because they couldn’t read the policy being used in the United States?”

And he insisted the UK should not "sub-contract" the UK's policy to the US CDC.

The rules on self-isolation will be changed in England
(

He said there were “early signs that the rate of hospitalisation is starting to slow” – but urged people who had not yet had a booster to get vaccinated.

The Tory minister added: “It is severe for anyone who ends up in hospital and that’s far more likely if you have not had a jab.”

1.3million of those at the highest risk have been sent a PCR test kit they can use at home, and access antibodies or antivirals if they test positive, he said.

Mr Javid said he had always insisted "any curbs on our freedoms must be an absolute last resort and we shouldn’t keep them in place for a day longer than absolutely necessary."

He added the government will announce “as soon as we can” whether Plan B measures – including masks on public transport, and work-from-home guidance – can end as hoped when they expire on January 26.

Mr Javid hinted Covid passes for nightclubs and large venues – also part of the Plan B measures – will soon be ditched in England.

Mr Javid replied: “On the issue that she also raised around the domestic certification, I have to say I do share my honourable friend’s instinctive discomfort.

“I want to assure her, I will assure the House, that as far as I’m concerned, we wont be keeping domestic certification in place for a moment longer than absolutely necessary.”