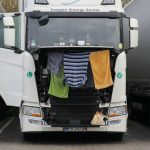 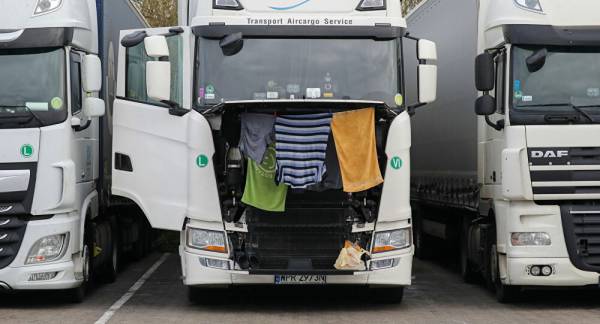 The discovery of a new contagious mutation of SARS-CoV2 in the UK has triggered a new wave of restrictions in the country and has led more than 50 nations to slap tough travel restrictions on Great Britain. Lorry drivers and officials have shared their personal experiences about the abrupt crisis at the border.

On 20 December, France shut its UK border for 48 hours over fears of a new coronavirus strain. As a result roughly 3,000 lorries abruptly got stuck in Kent being unable to leave the Port of Dover or Eurotunnel to France. On Wednesday, Paris eased its ban allowing some trucks to start withdrawing from the temporary lorry park at Manston airfield.

Thousands of Trucks Get Stuck Near Dover

“Basically, I started in Birmingham, it seemed to be OK, at 7 o’clock Sunday evening and it was a run-to-run overnight through the Eurotunnel to Brussels, unload and then we park up, have our sleep during the daytime, and then reload in Brussels, back through the tunnel, back to Birmingham with urgent spare parts for [engineer] Caterpillar,” recalls Russell Elphick, a lorry driver from the West Midlands.

While he was heading towards the tunnel he started getting messages saying: “Have you heard the news? It’s all shut”. So Elphick decided to “abort the mission” and went to a truck stop in Ashford. The authorities made plans for hauliers to drop their trailers in Dover port because the freight could still go although the driver could not go with it.

The whole town of Dover was immediately gridlocked with everyone trying to get to the port, the driver continues, adding that the authorities were not letting the drivers in because they haven’t had COVID tests and “they’re all being stubborn and just blocking the port”.

“The truck stop I was in in Dover takes about 200 trucks”, he notes. “The one in Ashford we were in Sunday night – that takes about 300. The M20 motorway, there must be about 1,000 trucks there and there’s a disused airfield that they’re using to store trucks on and I think they’re going to do the COVID tests there as well which is called Manston airfield… Err, there must be 1,000 or so trucks – a couple of thousand trucks parked up there in lines”.

Drivers are Frustrated and Angry

This situation was quite unusual, according to Elphick: previously, the pandemic did not affect freight drivers and they kept going all the way through Europe despite coronavirus restrictions.

“You could drive all around Europe without any tests or checks whatsoever, the trucks can,” the driver explains. “This is the first time anyone has ever said, ‘Trucks can’t cross the border’. It’s been crazy – it’s absolutely caused carnage.”

“In my opinion, and not only my opinion, but all of the drivers and other people – this has nothing to do with the new flavour of COVID. It has only to do with politics,” argues Marcin Jankowiak, planning director of DWP and Sons, whose drivers were stuck in queues around Dover during the first day.

Because of the uncertainty and confusion, hauliers were exhausted and angry, says Elphick, adding that drivers from eastern Europe are especially irritated as a lot of them did not quite understand what was happening or, perhaps, had difficulties with translation.

“They’re trying to turn them away from the port saying ‘you need to go and get COVID tests’ and  [the drivers] are just waving their arms in an ‘I don’t understand’ kind of thing”, he notes, bemoaning the fact that the authorities failed to provide people with exact details on where to go and what to do.

“From what I gather, the Manston airfield was already a test centre for the locals and I believe, they’ve set up now drive-through areas, for the trucks to drive through, get their test and then if it’s OK, they can proceed”, Elphick says. “This is what I’ve just heard through Facebook and various other things. But no one is really being told what you’ve got to do… no one really knows”.

The problem does not end there, remarks Jankowiak. He explains that truck drivers are literally blocked in Dover which means that when they were already tested, they still cannot get into the port. “That means that the test results will be out in 72 hours,” Jankowiak highlights, “so if they are not shipped across within 72 hours, that test will be not valid anymore.”

‘Locals Were Nice to Us’

Fortunately, Elphick and his peers heard about the queues beforehand and managed to go to the truck stop where they got everything they needed – toilets, showers, and food. He also carries a lot of food with him, plenty of clothes for two weeks, fridge-freezer, microwave and water.

Jankowiak was not as lucky as Elphick: “[The authorities] completely made a mess”, he says. “Nobody is prepared for anything. The people in there are not receiving any help from anybody. People are left there alone for 50 to 60 hours without any help. No water, no food. From this I know they were just giving candy bars. Wow. Unbelievable that is. You don’t treat animals like that, to be honest with you.”

Despite the chaos, locals were nice to stranded hauliers, says Elphick, recalling that the Sikh community provided food to some of the truck drivers. He singles out a local woman who spotted him chatting with a fellow driver and then brought them some hot food.

“I was sitting there talking and she came walking along with a tray and I said ‘Oh you angel! Thank you so much. Do you mind me taking your picture so I can put it on social media?’ And she goes: ‘No, no, just mention I work for P&O freight in the port and that’s good enough’. What a lovely thing to do”.

However, the locals’ patience isn’t limitless: “You can’t stop the lorries too long”, he notes. “I don’t think the locals will be too happy about it.”

It’s Unclear Whether the Crisis Will End Soon

Elphick believes that he will be home for Christmas: “Once we get into the port which is a quarter of a mile, if that – once we’re in there, I’ll be in and out in half an hour and get on the way to Birmingham no hold-ups at all”.

For his part, Jankowiak fears that the situation will remain complicated for quite a while. He notes that the real number of trucks stranded around the port is far from the one being transmitted by the media.

“The figures [2,850 trucks] that are being told on television or on the radio are false,” he insists, “because it’s about 15,000 trucks. If you go to Dover docks every day, let’s say 10,000 trucks came across. And we know that the period before Christmas is the peak in the follow up on the ferry crossing.”

The aforementioned situation clearly indicates that the Government’s response to the transportation crisis has been abysmal, says Steve Hedley, senior assistant general secretary of the UK National Union of Rail, Maritime and Transport Workers.

“If they had consulted with the RMT or other road freight unions this entirely predictable jam could have been avoided,” he insists. “Likewise the panic to travel which reached crisis point at [central London railway station] St Pancras last Friday could have easily been averted by consulting the trade union”.

The French government has eased travel restrictions permitting French citizens, British nationals living in France and truck drivers to travel in case they test negative less than 72 hours before departure.