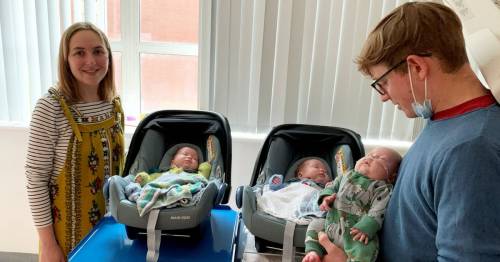 A couple have defied odds of "200 million to one" to welcome among the most premature sets of identical triplets ever to be born in Britain.

The tiny trio were born within just six minutes of one another to proud parents Lauren and Jack Mountain.

The pair were shocked to learn at their 12 week scan they not not only expecting their first child – but their first three.

Now the couple say they are learning to tell their identical boys apart – by their head shape.

Lauren, 28, and Jack, 29, from Bewdley, Worcestershire, were overjoyed when their incredibly rare triplets arrived safely into the world after being delivered by emergency C-section. 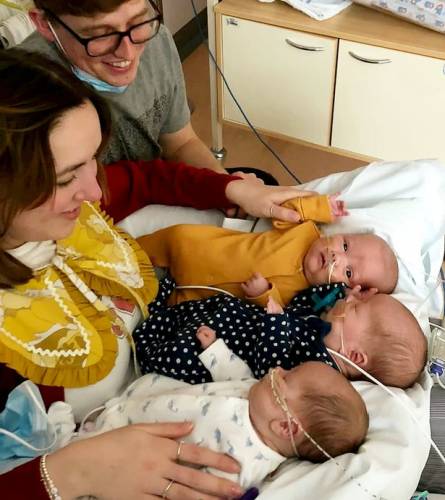 The couple are overjoyed at their triple arrival
(Image: Worcestershire NHS Trust / SWNS)

Lauren, a sustainability adviser, said: "When we found out we were having triplets it was a complete shock, we couldn't believe it.

"It was pretty hard to process and get our heads around it as there are no twins or multiples in the family.

"We FaceTimed family and friends to break the news and see the reaction on their faces.

"A lot of people couldn't believe it and thought we were having them on. We had to show them the scan pictures to prove there really were three of them. 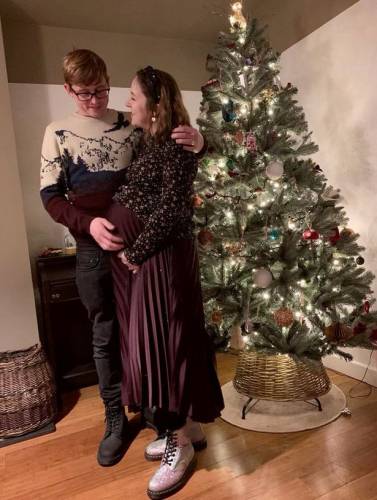 "They were sharing a placenta so we were told it would be a high-risk pregnancy. We were a bit scared and a bit nervous.

"We were worried about how we would manage having three at the same time because Jack is an only child and we had always envisaged having a small family ourselves.

"It took a few weeks to process then we became really excited.

She described the birth as "a hectic few minutes to say the least." 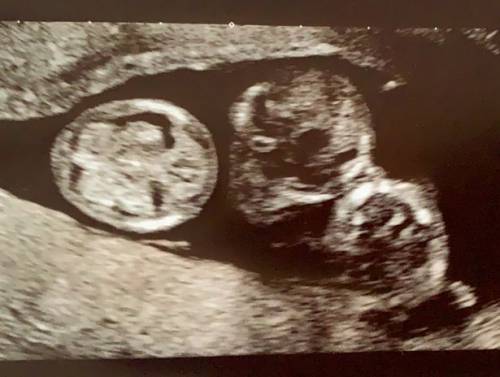 The couple had to show scans to friends and family who thought they were pulling their legs
(Image: Lauren Mountain / SWNS)

Beau and Leo have now returned home with their mum and dad while River remains in hospital as he still requires breathing assistance.

Lauren added: "It's been a very tiring few weeks, months actually – but we are doing good now.

"It's madness with Beau and Leo at home and we are going back and forth to hospital to see River every day.

"Thankfully we have got a lot of support because it is chaos already. 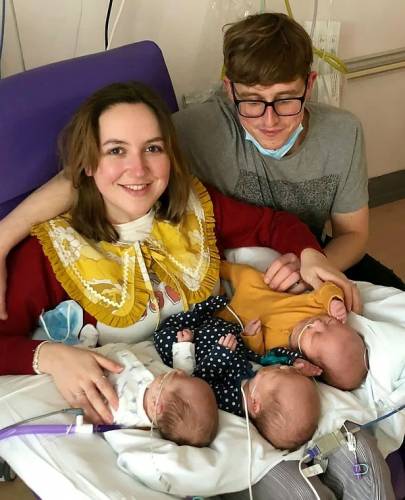 The couple say they can tell the triplets apart by the shapes of their tiny heads
(Image: Worcestershire NHS Trust / SWNS)

"Their grandparents look after the boys to give us some relief when we want a shower and go to see River in hospital.

"It is bittersweet being able to take the two home and leaving River in the hospital when he is otherwise so strong and healthy.

"We are just waiting for him to grow a little bit more and build up his lung strength so he can come home.

Speaking about how they recognise which triplet is which, Lauren said: "It is probably only Jack and I and a few family members who can tell them apart. I think even the nurses in the hospital struggled. 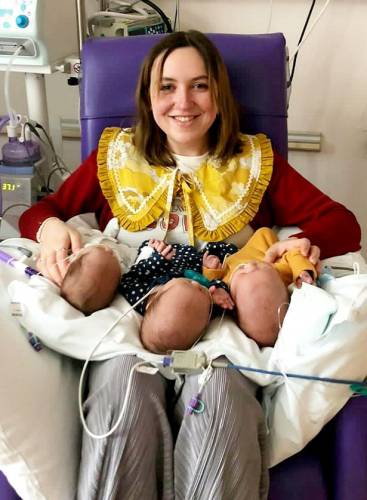 "There are differences in their head shape we use to distinguish them but they might grow out of those."

The first time parents were referred to a specialist following their 12 weeks scan due to a high risk of TTTS (twin-to-twin transfusion syndrome) because of the shared placenta.

Luckily it was a healthy birth, Lauren said.

"I woke up 12 hours later when they were already in the neonatal unit so I didn't meet them until later that night.

"I saw them first on Jack's phone because he'd been allowed to meet them earlier on.

"We had been worried about not being together due to Covid restrictions but because it was an emergency birth he was able to stay with me throughout. 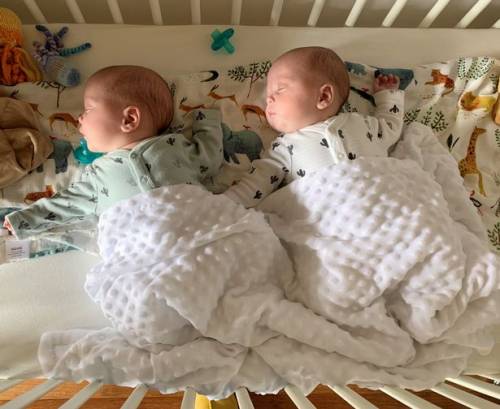 Two of the triplets, Leo (left) and Beau (right) are home with their parents while River remains in hospital
(Image: Lauren Mountain / SWNS)

"Jack is absolutely smitten with them and is a brilliant dad."

She added: "We went for unusual names because they are so unusual themselves.

"Some people did suggest giving them the same initial but we thought that would make it harder for them at school when they are already identical."

Jack, 29, a plumber and heating engineer, said: "I was really shocked to find out we were having triplets and it took a while to sink in.
"I was nervous about how we'd deal with having three at home at once.

"As an only child I had hoped to have a small family. It is a real handful but we are managing with help from our family.

"I was so excited once we knew the pregnancy was going well and I'm delighted to be their dad."