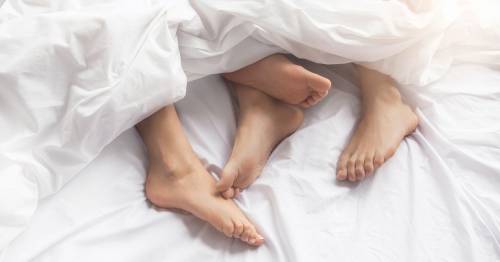 A couple who have sex "morning, noon and night" have been handed a noise warning after complaints from neighbours.

Lydia Barker, 31, and Billy Brown, 40, said their social housing provider has told them it will "monitor the matter" after rebuking their behaviour.

The randy pair deny making anything more than a few "moans and groans" and say the ominous warning has "knocked them off their stride".

Mum-of-one Lydia told The Sun : "It’s not as if I’m a screamer. I’ve never had any noise issues before.

“I’d not call my sex sessions extreme…a few moans and groans, of course. We’re doing it morning, noon and night, but not anti-social hours.”

Engineer Billy added: "The neighbours only have to put up with it for two minutes. What are they complaining about?”

The pair received a letter from housing firm Stonewater telling them they had been heard having sex.

Neighbours apparently find the noises "embarrassing and distressing" and want them to keep it down.

Unemployed Lydia said she has no idea which one of their neighbours in Castle Cary, Somerset, complained about their romping.

She branded their complaint to the housing association "very extreme" and said they could have just put a note through the door.

David, 64, who lives in a campervan outside Lydia's house, agreed that the complaint was a step too far.

He pops into the home for baths and meals, but says he has not heard any suspicious noises.

Stonewater said: “On reflection the letter we sent to Ms Barker about what is a very delicate matter doesn’t meet our usual high standards and we hope that it hasn’t caused any embarrassment or distress.

"We will continue to work with both Ms Barker and her neighbours to help them live alongside each other amicably whilst respecting each other's boundaries."

Previous : Russian ship carrying soldiers and weapons to Snake Island hit by Ukrainian missiles – World News
Next : EuroMillions £111million jackpot could make you one of richest ever UK winners TONIGHT