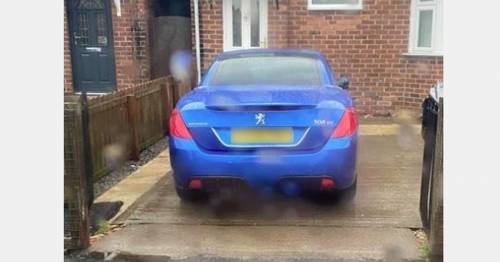 A couple annoyed at a car being parked on their driveway took matters into their own hands by “impounding” the car and demanding the owner cough up £100 before they released it.

The owner of the parking app that led the rogue parker to the driveway has slammed the move as “morally bankrupt”, but police have said it's legal.

Barry Newton and his girlfriend Zoe Hameston were baffled when they found the blue Peugeot parked at their home in Haltwhistle, Northumberland, without their permission last week.

The pair took to Facebook in an attempt to track the stranger down and demand they move their car, but upon having no luck with this they took matters into their own hands.

The pair blocked the car in with their other vehicles and upon the owner’s return, told them it would cost £100 to release it.

But when police were called to the scene they determined that 'no crimes were committed' by either party and so could only offer guidance on the matter.

The car's owner, apparently the victim of a parking app scam, is believed to have paid the £100 cash fee to be able to leave with their vehicle.

JustPark, a parking app called on which areas are listed as parking spaces for hire, confirmed that the rogue parker had used their app but had fallen victim to a 'potentially fraudulent listing'.

The company apologised to them for having to fork out the money.

Zoe's original Facebook post read: "Could the owner of this car, registration [redacted], please remove your vehicle from my private driveway within the next 30 mins or I will remove [it] myself, thanks."

But after 30 minutes, Zoe and Barry closed their gates and blocked the end of the drive before demanding a fee – in cash – from the driver.

When a commenter asked for an update, Barry replied with a photo of multiple notes being handed over to him
(

The driveway had reportedly been listed as a parking space for hire without the home owner's knowledge and the Peugeot owner parked there believing they had a legitimate booking.

Despite claiming to have 'rigorous checks' in place to ensure adverts are legitimate, the parking app admits that this listing was highlighted as potentially fraudulent when it was submitted back in 2019 but was set live by 'human error'.

Hours later the unaware owner of the car finally returned to find their vehicle 'impounded' – and Zoe claimed she was refusing to release the vehicle until they coughed up.

Zoe said in Facebook comments: "[It's] still f***ing here and apparently they have [been] on an app called [JustPark] and have [paid] to park on my sheltered drive with CCTV and lighting.

"When I have had a look [at] the description [for the advert] they would [have] known something wasn't right. They are now sat at [the] bottom of my street as I [can't] find [the] key to [the] gates and [can't] release [the] car [until] they now pay me."

When a commenter asked for an update, Barry replied with a photo of multiple notes being handed over to him – prompting people to react in shock.

Officers attended the address in Haltwhistle and offered advice to both parties but in the end it is believed the owner of the 'impounded' car was forced to pay up the £100 cash fee to be able to leave with their vehicle.

As the incident unfolded live on public Facebook posts, stunned locals commented 'what a cheek to park on someone's drive' urging the residents to 'clamp it' and 'charge them' to release the car.

But others warned that the owner of the car was the 'innocent victim' of a scam themselves and insisted that demanding a fee was 'morally bankrupt'.

However Barry defended his actions and said he had no proof the car owner was telling the truth as 'she couldn't prove it' when he asked for a receipt.

He said "at the end of the day, it's private property".

Police have advised that the payment of a £100 fee is a civil matter not for police to rule on and have said, should the car owner wish to, they can pursue this to see if they can retrieve the money back through the civil courts.

A spokesperson for JustPark said the homeowners had been apologised to while company employees had made attempts to contact both the driver, and the person who had advertised the parking space.

“In addition, we immediately took down the advert for the space pending sorting this issue out,” they said.

"It is unfortunate that, in this instance, this homeowner (who is not a JustPark customer) took matters into their own hands and impounded the driver’s car and demanded a fee for its removal.

"The advert for this space was submitted to us back in 2019 and our fraud team did highlight this space as potentially fraudulent, but I can see that a number of weeks later the advert was set live – this was human error on our part and we can only apologise for this.

"We have thousands of adverts submitted to us every month and the vast majority are genuine – we pride ourselves on being able to help homeowners generate an additional revenue stream, as well as being able to help drivers find affordable and pre-bookable parking spaces in locations that are convenient for them.

"On the very few occasions that there are complications between drivers and space owners due to a misunderstanding, we can usually resolve these quickly and amicably.

"However, this incident escalated disproportionately because the homeowner, who isn't a JustPark customer, reacted inappropriately and completely disproportionately and took the law into their own hands, impounding a vehicle which was parked by a driver who believed that they had a genuine booking.

"The booking in question was of course fully refunded last Wednesday. We have additional rigorous checks in place before any space owners can withdraw their earnings, which further prevents any fraudulent activity on our platform.”

The booking in question was fully refunded last week, the spokesperson said, while JustPark had been in touch with the driver to determine what steps would next be taken to resolve the situation.