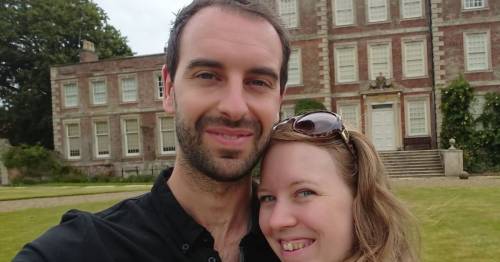 A groom has told of the "horrendous" moment he discovered his wedding day was cancelled.

Chris Marshall was due to marry his fiancée Laura Davies, 31, next year and the pair were looking forward to tying the knot at Matfen Hall near Hexham, Northumberland, on November 5.

But the 32-year-old company director said that they were "horrified" to learn via email that the venue had introduced a £20,000 minimum spend.

Maften Hall has said they would receive a refund, but Chris claims they will be out of pocket after forking out cash on a florist and band for the celebration.

And the couple were stunned to see the cancellation included a note suggesting if they wanted a new 'bespoke quotation' they could ask – despite just having their carefully-made plans torpedoed in the same message.

Chris and Laura were hoping to spend £9,000 on their wedding venue
(

Now the pair are in a desperate search for a new venue but face a desperate scramble among the hundreds of other cancelled weddings from the last 18 months across the UK.

Chris, from South Shields, Tyne and Wear, said: "When we got the letter [via email], we were horrified. We actually happened to be on holiday at the time so it was made even worse.

"We were sat in a restaurant ready to go to the theatre for Laura's birthday present which made it worse.

"When Laura read the letter, it was horrendous.

"She was sat reading this before I saw it and I knew something had happened, but looking across I didn't know if somebody had died or something.

"They're cancelling the wedding because we're paying under £20,000. There's been no other correspondence.

Chris and Laura had planned to spend around £9,000 on their nuptials, welcoming family from London who would likely spend a thousands more on stays at the hotel and bar.

Although they had paid £1,000 to Matfen Hall, which will now be refunded, the pair are set to lose hundreds to other businesses if they can't rebook the same day.

"I roughly worked it out in my email to them that with people coming up from London and staying, eating, drinking, it'd be about £18,000 we'd give them.

"If we can't rebook for the same day, we'll lose all the deposits, along with other couples.

"We rang them up to say we'd like to go speak to them. We were told a date when the managing director would be in.

"I sent an email on Sunday night but I've had no response at all. That letter we've had was the only correspondence."

After posting about their stressful experience on social media, Chris claims the pair have already been contacted by other venues offering their services.

Chris said: "We looked at a venue last night and in fairness, because of my post, a few directors of other venues have got in touch and they're happy to help.

"The reaction we've had is all the same. You see things on social media and a lot of the times, people are split, but it's 100% people being mortified at what they've done and how they've handled it. The fact it's so blunt."

On their site, Matfen Hall claimed they had "absorbed the cost" of increasing wedding prices at a cost of £1.2million but could no longer sustain it.

The statement said: "Since the lifting of Covid restrictions in May, Matfen Hall has hosted 56 weddings with a further 55 planned for the remainder of this year. A further eight weddings are scheduled in the first quarter of next year.

"We have honoured these 119 weddings at prices agreed in 2019 and 2020 by the previous management. In doing so, this is coming at a cost to the hotel of over £1.2million.

"When we made that commitment, it was with the best of intentions but regrettably, it is one we can no longer continue to sustain.

"The hotel employs over 130 people and uses many local suppliers that rely on us.

"Our team cares passionately about our guests and ensuring they have the wedding of their dreams. However, it is not possible to absorb those costs indefinitely while at the same time ensuring that Matfen Hall remains a venue where people can come to relax and get married for many years into the future.

"We understand that this will be disappointing for those affected by this difficult decision, made in light of what is currently an extremely challenging time for the hospitality sector.

"The current management team took over Matfen Hall prior to the prolonged lockdowns we have since seen, and with the intention of undertaking multi-million pound refurbishments requiring a two-year closure.

"The volume of weddings that had already been booked, however, led us to reconsider closing and instead honour 119 weddings whilst absorbing the extra costs and running a loss.

"The challenge of running weddings at a loss has been further compounded by the huge labour shortages we are now seeing in the UK hospitality industry.

"At the time we made our commitment we could not foresee the huge additional strain this would put on our existing staff to handle the volume of weddings we have seen as a result of postponements and cancellations that have been brought forward.

"Every wedding is special and this is an outcome we tried our utmost to avoid. We have returned all deposits and given more than nine months’ notice to all those affected, but we recognise the disappointment this has caused."