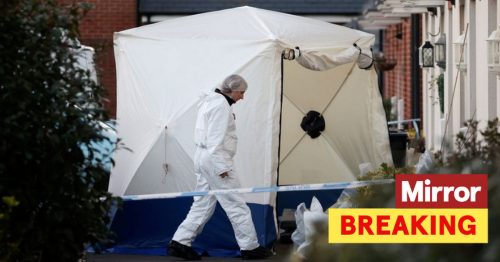 Couple found dead at home ‘may have been killed over parking row’, say neighbours

A young couple murdered in their home in front of their children may have been killed in a row about parking, neighbours have said.

Residents living close to the couple in the sleepy village of Norton Fitzwarren Somerset, named them as Stephen Chapple, 34, and his wife Jenny, also her in her 30s.

Two children who were in the property are said to be unhurt but distressed.

Stephen is believed to be an IT teacher and Jennifer worked at a nearby garden centre.

Neighbours suggested they had been involved in a row about parking with other residents in the months before their deaths.

Residents living close to the couple said they had been friendly, and had two young sons aged around four and seven.

A cordon remains in place at two properties on the street while officers carry out a number of enquiries, including a forensic examination of the scene.

Do you know anything about this incident? Email webnews@mirror.co.uk

Other neighbours living on the new build estate around Dragon Rise described the area as quiet, and one resident described the victims as "very friendly".

"I knew them by sight but I didn't know their names, my dog used to really like the lady."

A formal identification process and post-mortem examinations to determine the causes of death will take place in due course.

Due to prior police contact with those involved, a voluntary referral will be made to the Independent Office for Police Conduct.

It would be inappropriate to go into further detail until the referral has been considered, Avon and Somerset Police has said.

Detective Inspector Neil Meade, of the Major Crime Investigation Team, said: “The thoughts of everyone in the force this morning are with the families of the two people who sadly died last night.

Police have launched a murder probe
(

“Two young children were inside the property at the time of the incident and while thankfully they weren’t hurt, they are understandably distressed at what has happened.

“They are being looked after and specially trained officers have been deployed to support the victim’s families in what is undoubtedly the most difficult of times.”

He added: “We will carry out a full and thorough investigation and we will do all we can to achieve justice for the victim’s families.

Detectives are investigating the deaths
(

“While this appears to be an isolated incident, there will be increased police activity in the area to provide the community with reassurance.

“Incidents like this are very rare but when they do happen, we know they cause significant concern so we’d urge anyone with worries or questions to speak to an officer or contact their local neighbourhood policing team.

“If anyone has information which would help our investigation, please phone 101 and give the call-handler the reference number 5221274497.”