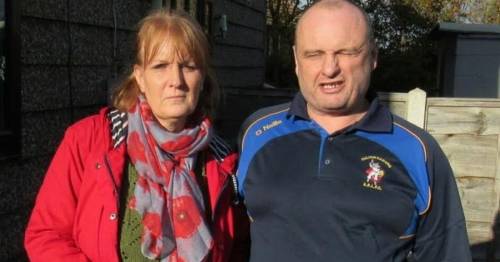 A couple whose home is being bulldozed say they fear being made homeless just weeks before Christmas.

John and Cindy Readman have worked all their lives and spent the last 16 years living in their home in Oulten, Leeds, growing their family and community.

But their former National Coal Board home, along with seven others, has been deemed to be structurally unsafe.

The couple's landlord, Pemberstone, wants to demolish the houses to make way for a new development as it is the "best option to secure its long-term housing future."

The couple have been frantically looking for a new home for them and their youngest son, but say the rising rent costs around the city mean they cannot afford to find a new place, much less be able to put down a deposit.

They worry that they will not have found anywhere by the December 1 deadline – meaning they'll be left on the streets during the festive season.

John, 60, told LeedsLive : "I don't think we can plan anything past the 1st of December. We can't plan for Christmas, we can't have family around, I just don't know – we can't really say with any certainty what the future will hold.

"The future looks like probably being made homeless. My wife and I have worked all our lives and never claimed benefits or anything and through no fault of our own other than what we class as social gentrification and greed we're going to be thrown out on the streets."

John and Cindy, 56, are among eight houses judged to be 'the most structurally unsound' by their landlord, who have wanted to redevelop the estate since 2019.

Planning inspectors say all the houses, but particularly these eight, have deteriorating concrete panels and pillars.

The tenant say they can't find housing they can now afford
(

All the houses on the estate will eventually be bulldozed, but only 11 protected original miner tenants will be guaranteed a new house on the estate.

Administrator John, and teaching assistant Cindy, have been fighting the bid to bulldoze the estate since 2019, with but in August were given four months notice to leave.

John said they are not the only ones on the estate who are having trouble to find a new place due to high costs.

"People keep saying 'why don't you just move?' But where? There's nowhere to move to – what can you do? It's not as simple as that – everybody's looking and we're all running out of time," he said.

"It's not just that either – we've got some people on Universal Credit or housing benefit – they just get pushed to the back of the queue because no one is choosing people for houses when they might not be able to pay the rent."

Cindy has been campaigning to be able to stay
(

He added that all the lets they have found have been more than £100 a month more, meaning people are being priced out of the homes.

John added: "Everyone's just getting by – they manage to pay their rent and bills and there isn't much left. So putting money away isn't really an option."

For John and Cindy, it's not just about finding a new house.

They have raised all three of their children in the home, and know the community which has been built up over decades is likely to fade.

Cindy said: "Most of the people who live on this estate will have grown up in the area. They're going to be dispersed all across Leeds, maybe Wakefield, in areas that they don't know and are unfamiliar with. They'll be away from their family and friends and support networks.

"There's a family of us with our two cats. I can't really describe in words what it's like – it's awful. We have memories here. When we first moved to the estate we thought we'd move on after a bit, but because of the community and the people we made friends and our kids grew up here."

With the deadline looming, John said they're feeling the stress acutely and are "at their wits end" with looking for somewhere to live on top of working every day.

He added: "And we're just thinking one day someone's going to come and physically remove us from the house and lock us out. It keeps me awake at night, it's stressful. I've noticed my mental health change – I'm more irritable and withdrawn and I can't be bothered to do things that I normally do. And that's down to the stress of losing your home."

Landlords Pemberstone first applied for planning permission to bulldoze the estate of 70 former National Coal Board homes in 2019.

Permission was initially denied by Leeds City Council, but a government planning inspector o verturned the decision on appeal in 2020.

Campaigners have urged the council to buy the homes and refurbish them, but this was deemed to be too expensive.

A spokesman for Pemberstone said: " For the tenants who have to move, we have provided a four months’ notice period and have offered an ex-gratia payment equivalent to up to six months’ rent to help with relocation costs.

"Leeds City Council has also assured tenants that they will be supported in obtaining alternative accommodation, which includes home visits if necessary to process their applications."

They added: "We firmly believe that the redevelopment of the estate, which would include the creation of new affordable housing, is the best option to secure its long-term housing future."

A spokesperson for Leeds City Council said tenants who are being evicted have been given advice, and has provided further support those tenants losing their homes and not yet engaged with Leeds Housing Options to "hopefully reduce the time taken to be successful with an offer of a suitable council property."

They added: "We do not currently know the outcome of who will purchase the site and develop it but are committed to working with them to ensure preference is given to any affordable homes provided for rent to tenants who will have displaced."

Previous : Landlord fined for evicting pregnant woman and leaving her possessions on street
Next : Could take ‘days or weeks’ to fix flood-damaged parts of Cape Breton