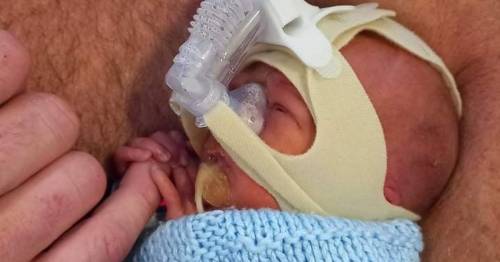 A 'terrified' expectant couple discovered their unborn baby was an hour away from death when they arrived at hospital.

Richard, 39, and Danielle, 32, who wanted to be known only by their first names, were told their son had to be delivered eight weeks early to save his life.

They said their baby's heart rate was dropping after Danielle went to hospital with stomach pains.

Medics discovered she had a suspected ruptured placenta and needed an emergency caesarean so baby Owen was just 2lb 7oz when he was born – the weight of a pineapple.

Richard, from Wallasey, Wirral, told the Liverpool Echo : "Danielle had started having pains and we went straight to hospital.

Baby Owen was an hour away from death
(

"They told her they thought it was a suspected ruptured placenta – which is what it turned out to be – and Owen's heart rate was right down.

"She had emergency surgery to get him out. It was terrifying, completely heartbreaking.

"We were told if we had left it another hour, he wouldn't have made it because his heart rate was so low.

Tiny Owen was just 2lb 7oz – the weight of a pineapple – when he was born on October 7, but his dad said he is going from strength to strength.

Richard, who is also dad to Cain, 19, Lewis, 14 and stepdad to Jack, seven, said: "When he was born we heard him cry like a kitten and then he was given straight to Danielle and then I held him for a bit.

"He was then taken to intensive care and we didn't see him for a few hours.

"We had joked about having to get everything ready for when he was born just a few nights before, and now here he is.

"But he is doing really well, he was bigger than they expected and he is already off his oxygen and is now taking full feeds.

"We can't thank all the staff at Arrowe Park enough, they saved his life and made everything so much easier for us."

Owen has not yet met his brothers and sisters due to Covid restrictions on the hospital wards at Arrowe Park.

Richard said: "They are made up and they can't wait to meet him.

"We expect he will have to stay in until his due date in December, but he has been doing so well, he might be able to come home a little sooner."

He added: "We called him Owen and didn't realise at the time it means 'young warrior', which is exactly what he is."